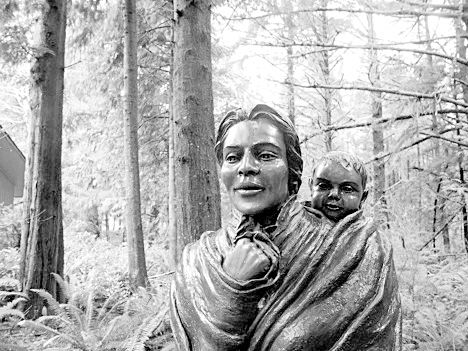 Sacagawea and her son, Jean Baptiste Charbonneau, nicknamed “Pomp” by William Clark, stand as statue in the rainforest at Fort Clatsop. The Shoshone woman’s very presence on the journey saved lives and negotiated supplies and horses. 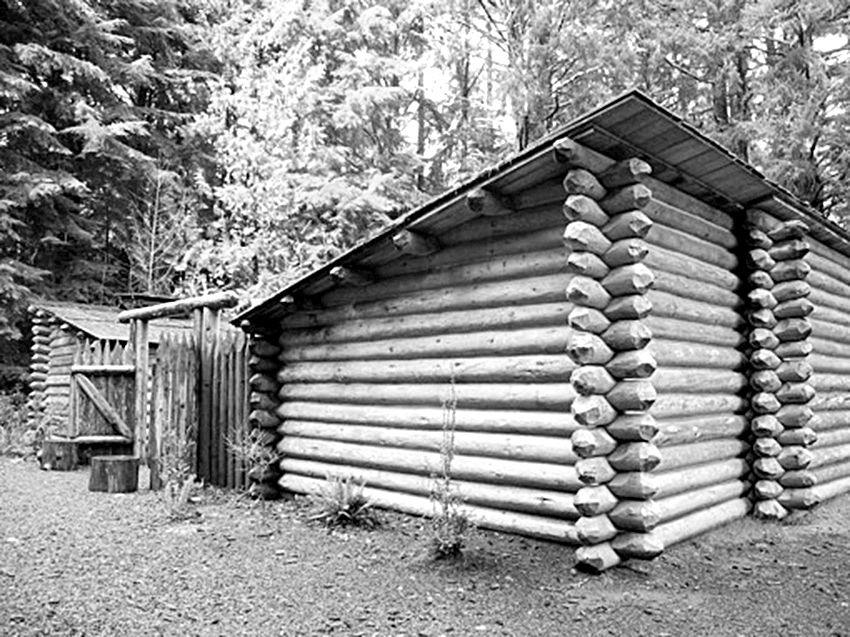 Sacagawea and her son, Jean Baptiste Charbonneau, nicknamed “Pomp” by William Clark, stand as statue in the rainforest at Fort Clatsop. The Shoshone woman’s very presence on the journey saved lives and negotiated supplies and horses.

Visitors to the Lewis and Clark National Historic Park’s Fort Clatsop, frankly, are sometimes underwhelmed by it, as were the indigenous natives for which it was named.

Three times now I have visited this national landmark, located south of Astoria, Oregon, and each time it has rained as fronts came in off the nearby Pacific. It heightens awareness of what winter must have been like in this tiny outpost of an American empire in the making.

Depending on the time of day you sometimes can catch glimpses of elk herds grazing, much as they roamed the area during the winter Lewis and Clark forted up deep in this rainforest near the sea.

The visitor center leading to the replica of the original fort is larger. From arrival, November 1805 until March 1806, the Corps of Discovery endured the monotony of constant rain and a diet of mainly elk to the point of revulsion. They were more than ready to leave for the return home to the states. Elation at reaching the Pacific turned to tedium in this place of eternal wet and overcast skies.

The “fort” was more a stockade row of lean-to log rooms. Small, cramped, prone to filling the tiny rooms with smoke from poor drafting chimneys, it was home for the seemingly endless winter once the expedition had reached the Western Sea.

It took the men three-and-a-half weeks to build Fort Clatsop; heavy downpours and high wind off the ocean made it difficult to fell and drag timbers to the site. The roof wasn’t even complete when they moved in to the fort Christmas Eve, 1805.

During their stay here Commander Meriwether Lewis and Second Lt. William Clark worked on their journals; the men boiled sea water to make salt and readied equipment. Military order was observed and sentries guarded the gates which stood not much higher than the ceiling in a proper red brick house back in St. Louis.

The shed roofs channeled the almost constant rain into the tiny common area inside the stockade, making a muddy pond at times. The site averages 70 inches of rain annually. It was a miserable existence that literally rotted the elk skin and cloth off the men’s backs.

If the fort was less than impressive the Corps’ feat of marching, poling, paddling, and plunging through Missouri River shallows, the mighty Columbia, and the top of the world in the Rockies was known only to them.

Back in the National Capital District in Washington, President Thomas Jefferson assumed the 37 officers, non-commissioned and enlisted men along with 15 civilians, had perished to a man when there was no word after walking west from Fort Mandan on the upper Missouri in 1804.

Fort Clatsop was given to the Clatsop headman, Coboway. The tribe, in turn, used the structure for security and storage. The American Fur Company, John Jacob Astor’s powerful fist in the wilderness, located an outpost in the area, thus the city of Astoria.

The British competition, Hudson’s Bay Company, opened a post as well further up the Columbia River. By the mid-1800s, though, the fort had pretty much rotted into the ground.

The expedition’s goal of establishing friendly relations with resident tribes suffered the inevitable culture clash. Even as they shoved off from Fort Clatsop, they headed home with two Clatsop canoes, one of which they had pilfered from their native neighbors when the tribe was reluctant to part with more than one of the precious craft.

It all came to violence on the Two Medicine, a tributary stream to the Marias River in northwestern Montana. At an overnight camp among a group of Piegan Blackfoot young men, the encounter ended in gunfire when the Indian youths sought to claim what they believed they had won in gambling with the Americans.

In a bizarre act the Blackfoot believed was counting coup on a dead person, Lewis put a Jefferson peace medallion around the neck of the dead youth. The gesture angered the tribe even more toward white intrusion on their land. For the next 80 years Piegan Blackfoot land was a risky venture for the luckless and those who entered uninvited.

But it was the Teton Sioux, or Lakotas, who threw the fear of God into the expedition on the return to the United States. Their sharp elbows and aggressive reaction to uninvited intruders had made a wide swath of high plains country their exclusive hunting grounds.

Lewis and Clark wrote bitterly of the encounter with these “vile pirates of the Missouri” who stole from them at night and taunted them by day.

Shouted obscenities and lewd gestures from across the Missouri’s muddy current marked the Corps’ passage through Lakota territory. It was a dangerous time of high alert even though Jefferson wanted the Lakotas pulled into the American orbit.

For the Teton Sioux it was bare-knuckle trade diplomacy. They meant to control this new commerce already coming up river on flatboats from St. Louis.

Note: Lowell Carlson and his wife, Brenda, travel in the Pacific Northwest where they spend part of the year at their home in Napavine, Washington.