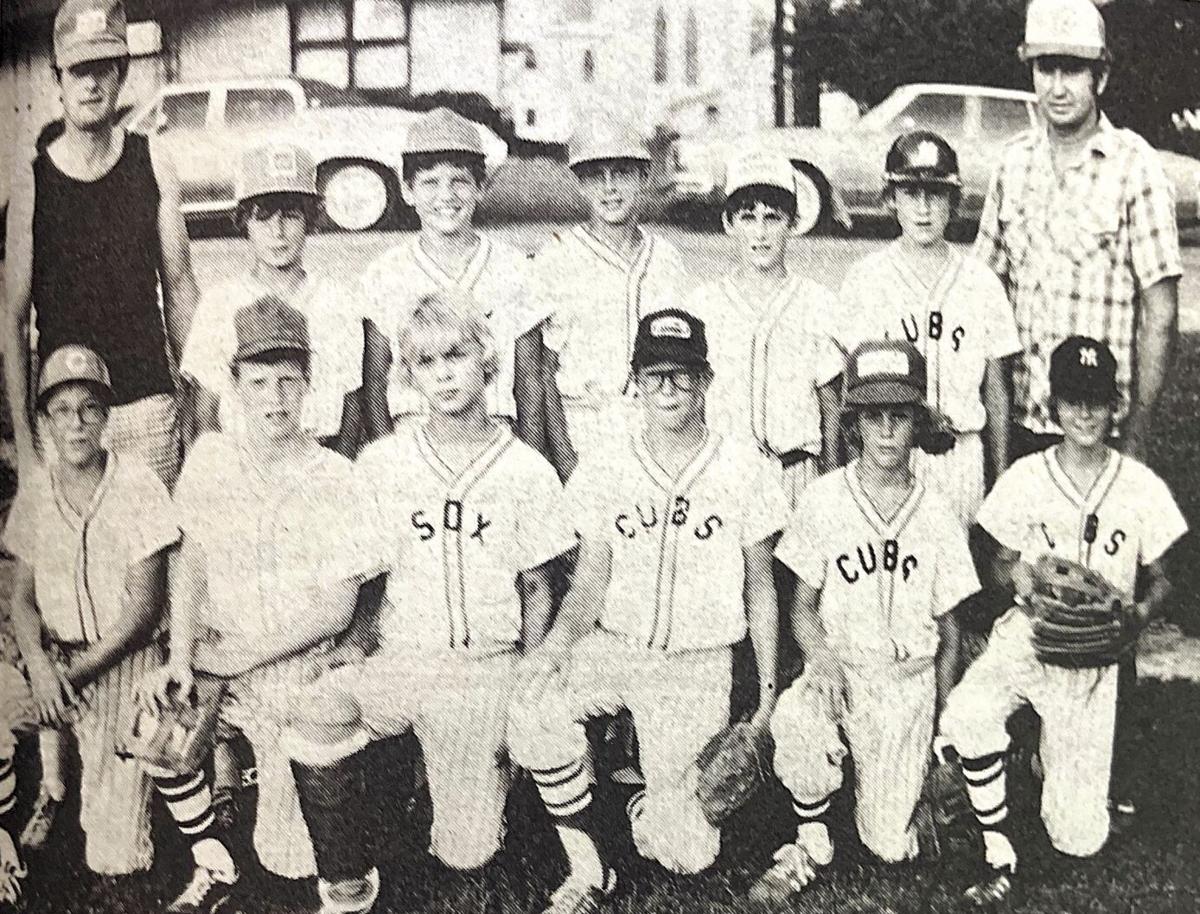 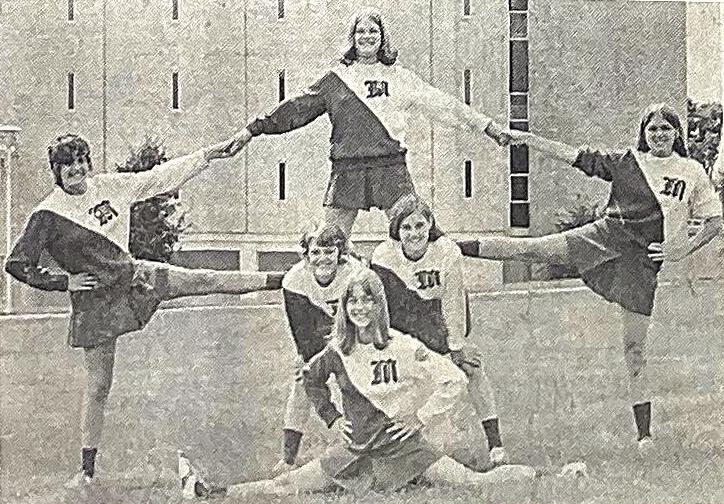 Practicing for the coming school year were these Marquette high school cheerleaders, who recently attended a clinic in Wisconsin State University, Platteville.  In front is Suzi Dunn, with Winnie Lauterborn and Peg Weinschenk standing behind her.  Holding hands from left, are Barb Michels, Carol Kutsch and Donna Klaas.

Practicing for the coming school year were these Marquette high school cheerleaders, who recently attended a clinic in Wisconsin State University, Platteville.  In front is Suzi Dunn, with Winnie Lauterborn and Peg Weinschenk standing behind her.  Holding hands from left, are Barb Michels, Carol Kutsch and Donna Klaas.

Mrs. Michael Michels met an accidental death at her home Tuesday morning.  The family had been in the habit of hanging different things in the cistern to keep cool and it is generally believed that while in the act of drawing something from the same, Mrs. Michels lost her balance and fell into it.

A runaway team driven by one of the Hinke boys caused considerable excitement on State street Saturday evening when they became frightened and dashed west at a wild gait.  Mr. Hinke held onto the reins and made a game effort to bring the team to a stop, but was unable to do so.  Clarence Pinnell followed the runaways in his car and when near the T.J. McCarthy home came alongside of them and succeeded in stopping them.

She was in many ways a remarkable woman.  Well educated, a large reader, possessed of more than ordinary intelligence, she was one of the leaders of the community.

The town of Preston is considering the proposition of building a dam near that place to form an artificial lake.  The lake would cover from 15 to 30 acres and besides ensuring a regular annual ice crop would furnish fishing and bathing for the people of that town and vicinity.  The idea is a commendable one and Preston has the spirit that will put it over eventually.

The board of education desires bids on 100 tons of Franklin county 6-inch lump coal to be delivered complete in the school basement.  Bids close Monday.

The park commissioners gladly acknowledge the receipt of a $50 contribution from Henry G. Johnson for the new pavilion in Riverview Park.

That the stage of the river is at an unusually low ebb is shown by the fact that the boys, who swim every evening, can be seen wading what in other years is a midstream channel.

Leslie Blitgen and Kenneth Eggers spent Sunday with home folks.  The boys are employed on the UlS. Etna at Dubuque.

Work on the Scenic highway on each side of town is progressing nicely. The drag line outfit completed making the new entrance to the State Park, which will be made to the south, thus eliminating the sharp turn a short distance into the park.  North of town a shovel is working in rock on the Schulte hill and a temporary road is allowing traffic to get by.  The shovel is working on the road between Duck Creek and Leppert hill.

Clem Fransen, the jeweler, has been appointed watch inspector for this division of the Milwaukee Road.  It will be his duty to inspect the watches of local railroad employees every two weeks and keep a chart as to the condition of each timepiece.  Every six months each watch will be thoroughly inspected and a report sent in to headquarters and every 18 months each watch must be cleaned.

We notice that the powers that be are talking of closing the state parks at sundown because two or three thugs have broken some park rules.  That would be a senseless proceeding.  The state parks are supposed to be open to the public and closing them at sundown would make them almost valueless.

The favorite sport of people on Second street these days is counting the free riders on passing freight trains.  Thirty-one were seen on one south-bound train the other day.

It isn't often that a baseball pitcher can keep the opposing team from making a hit for seven innings, but that is what Clarence Sieverding did Sunday afternoon when he sent the Green Island batters back to the bench without a safe blow.

Local postal employees have handled hundreds of pounds of bulky Sears & Roebuck catalogues during the past week.

R.W. Morris, a registered pharmacist, has leased the Dierkes building on the corner of Front and State streets and will open a drug store here about August 1.  The building formerly housed the Hodoval Rexall store.  Mr. Morris is married and has a wife and two children.

The 88-foot flagpole in Riverview Park was painted Monday afternoon by a nimble steeplejack who entertained the bystanders as he climbed the pole with the use of ropes on his feet and around his waist.  Several onlookers and cars parked in that locality got a free sprinkling of paint when a sudden gust of wind banged the workman's bucket against the side of the pole causing it to splash out.

Harold Meier is the new manager of the American Legion club rooms.

Larry Michels, 12 year old son of Mr. and Mrs. Peter Michels, fell off a load of hay last Thursday afternoon and broke both bones in his right forearm.  He has been a patient in Memorial Hospital.

Stonewall Jackson, the young romantic singer, will be on the program with Grand Ole Opry at the Jackson County Fair Saturday evening.  He headlines a large cast from the famous radio and TV show.

Bellevue Boat Store: Bellevue store is open to towboats.  Terry and Jean Putman opened the business March 15 at a small house before moving to their new location.  Besides the Putmans, Kevin Arrington of Bellevue also works at the store.  Jean says her "grocery toters,"   Terry Lee, Jr., Jeremy, Michelle and Billy, have even helped on occasion.

The prospect of dealing with as many as 10,000 visitors Saturday, July 27, takes some preparation.  The red carpet will be out on South Riverview for cyclists to ride over on the way down to the river and the symbolic dip of the front tire in the Mississippi.  The arrival of RAGBRAI has taken many months of preparation by local volunteers and organizations.

Bellevue State Bank will build a new 4,700 square foot banking facility at the corner of Second and Court with expanded customer services.

Lampe explained the expansion comes from customers' requests for merchandise he previously did not carry.

Come be a part of the Off Shore Resort Team!