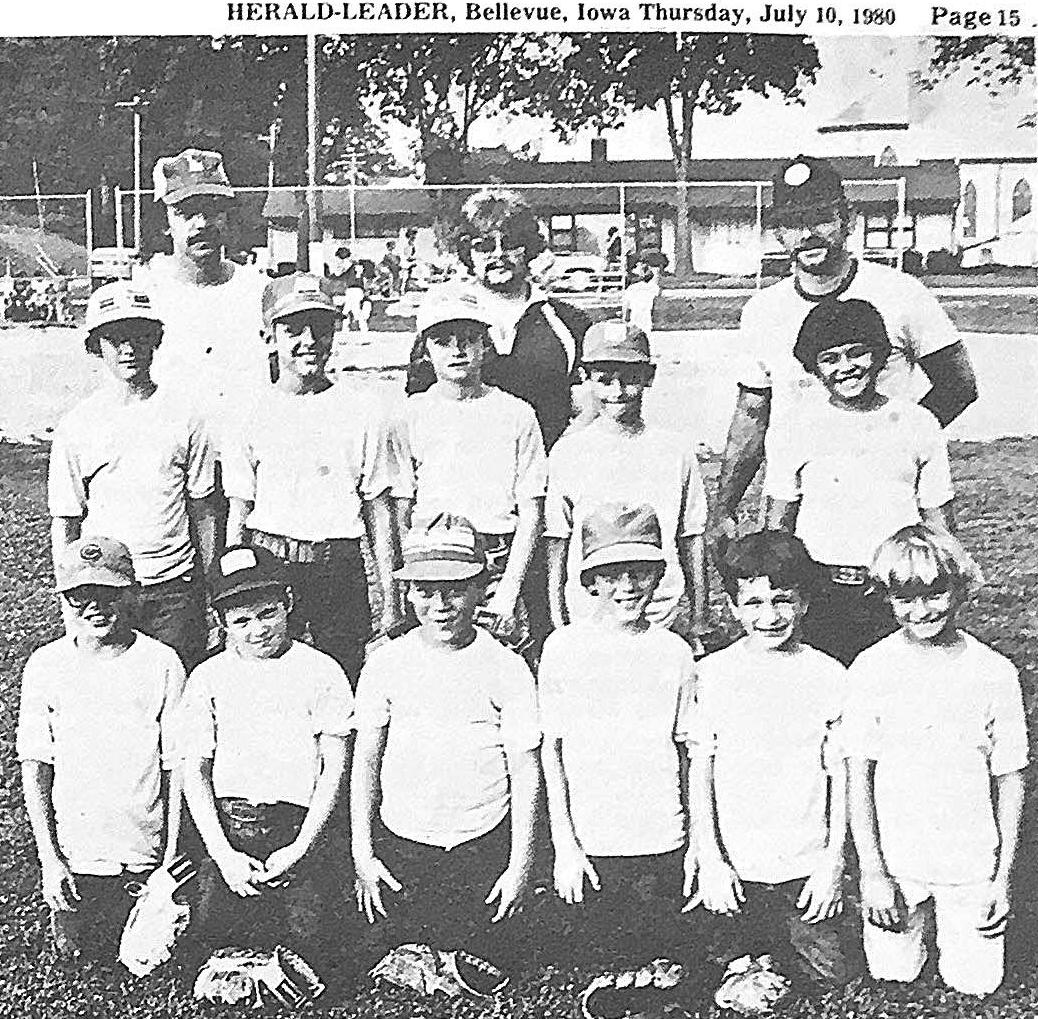 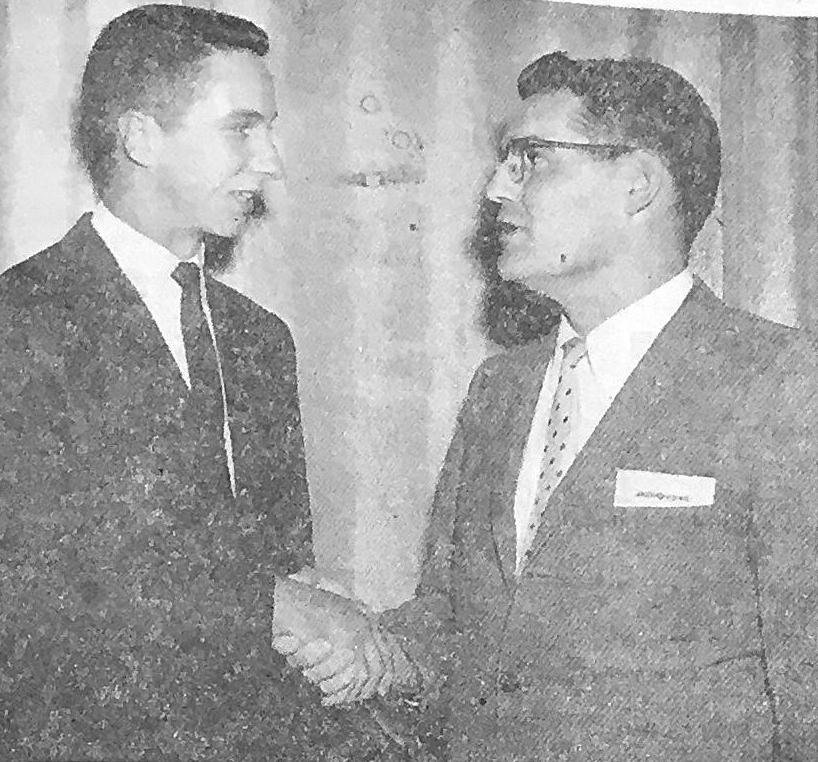 Rep. Leonard Wolf, right, congratulates Daryll Eggers of Bellevue, Iowa's winner in the second annual "My True Security" contest of the United States Junior Chamber of Commerce.  Daryll was in Washington, D.C., for the national competition.

Rep. Leonard Wolf, right, congratulates Daryll Eggers of Bellevue, Iowa's winner in the second annual "My True Security" contest of the United States Junior Chamber of Commerce.  Daryll was in Washington, D.C., for the national competition.

Mr. and Mrs. Charlie Heim are receiving the congratulations of their friends on the birth of a twelve pound son who arrived at their home on the Fourth of July.

With carnival week only two weeks off, a suggestion that our people spruce up their premises and put them in gala attire for the occasion is not out of place. There will be many strangers here during that time and it behooves us all to maintain our reputation of having the cleanest city on the river.

Julius Neiman and little son, Theodore, were passengers for Dubuque Thursday where they visited with Mrs. Neiman, who holds a responsible position at St. Joseph's sanitarium.

Hon. N.B. Nemmers and son Julian, arrived here this morning at 4 o'clock en route to their home at Lamotte from Rochester,  Minn., where the former is taking treatment at the Mayo Institute.

The condition of "Billy," Dr. Dennison's pet dog who was stricken with paralysis, became so critical Wednesday morning that the doctor ended his suffering by administering chloroform.

A son and heir was born to Mr. and Mrs. Joseph Daugherty Thursday morning.  This is their first child and Joe is just about the happiest man in Jackson County.  We join their many friends in offering congratulations.

Government agents, assisted by police of that city, made a raid on several illicit stills in Dubuque last week, arresting the operators and confiscating the stills and a large quantity of moonshine whiskey.

The parties who have been taking plants from the beds in Riverview park are known and will be punished if the act is repeated.

Robert, the 6-year-old son of Ralph Putman, was drowned in the Mississippi River Sunday afternoon between five and six o'clock, and the body was recovered last night about 7 o'clock along the shore about four miles south of town. When the boy failed to appear for supper, a search was instigated. It was found that a small boat which had been tied to the bank east of the George Putman house was missing and this boat was found the same evening near the mouth of Duck Creek.  One oar was in the boat and one was floating nearby.  It is thought probable that the lad rowed out into the current, dropped one oar, and in an attempt to regain the oar, fell overboard and was drowned.  Robert was left motherless five days after birth and was reared by his grandparents, Mr. and Mrs. Jake Putman.  He is survived by his father who lives at Pierre, S.D., are two brothers, Willard and Edward, and a large number of other relatives.

John Weimerskirch has taken over the management of the Riverview Billiard Parlor, formerly owned by H.O. Sprank.

Work on the new St. Joseph's school has been held up the past few days until the arrival of stone to be used in the construction of the main entrance.  The rock will be shipped today.

Recently the home of Mr. and Mrs. Chris Clausen residing west of town was entered while the family was away.  Between 70 and 80 chickens were taken and evidently eats were what was wanted for the family cellar was the only place they visited, taking from there 14 gallons of lard and 12 gallons of meat, together with fruit, some of every kind in the cellar.

Elmer H. Felderman of near Gordon's Ferry was struck on the right shoulder Monday by the tine of a pitchfork while making hay.  The tine punctured his right shoulder and Dr. Lampe took care of the injury.

July 4th was just another day in Bellevue and with the zip of the firecracker gone the day was indeed quiet.  Not so at Danceland Park north of here where 4,000 people attended the celebration.  Parking space on the grounds was filled early in the evening and 1500 cars were parked in the adjacent Kueter field.  The dance floor was filled to overflowing with 800 dancers, the largest crowd ever entertained there.

Mrs. Marie Rieckens is recovering in her home from a bad fall from a ladder while picking cherries Friday.  While she is able to be up, is quite miserable at times.

The intense heat, which held sway here for several days was broken Wednesday night by wind and rain.  The temperature dropped from 98 late yesterday to 68 this morning and a delightful breeze gives decided relief.

The bid of the Kempter furniture company to furnish playground equipment for Cole Memorial park was accepted Wednesday night by the town council.  The bid for the various pieces of equipment including teeter-totters, swings, tennis court equipment, a merry-go-round, etc., totaled $1,900

Beginning immediately and continuing for at least one month, Savanna Ordnance Depot will be proof testing many lots of .39 and .50 caliber trace ammunition.  Machine guns to be used for this purpose will be set up on the island presently used for ammunition demolition and burning work.   Missiles may be expected to fall in many places from the point of fire up to a maximum of 4,000 yards.

The search for wolves and other wild animals which prey on farm animals and fowl continues on the post and immediate vicinity of the Savanna Ordnance Depot.  On June 16th, a full grown wolf was captured by means of steel traps.  Previously four wolf cubs were dug out of a den, and on another occasion a full-grown wolf was killed with a shotgun and the mate was wounded.  Several foxes were also caught.

All locks and dams on the Mississippi River between Minneapolis and St. Louis were closed to the public as a security measure.

Lawn mowing is an easier task and helps more in maintaining a healthy lawn when the roller is set so the mower cuts the grass off at about 1-1/4 to 2 inches from the ground.

Melvin Ries has just completed a fine new dairy barn on his farm west of Bellevue.  The structure is 40 x 60.  Another barn has been completed on the farm of Anthony Schwager on Mill Creek.

Edmund Gibbs of Bellevue announced this week that he would file for nomination as first district supervisor in the Nov. 8 general election.  He will run as an independent and will oppose Earl Burke of Bernard.

A PTA sponsored teen hop will be held at the Bellevue public school gym Friday evening, July 8, from 7:30 to 10:30.  Chaperones for the event will be Mr. and Mrs. Cyde Jess, Mr. and Mrs. Ed Gibbs, Mr. and Mrs. Kenneth Gieseman and Mr. and Mrs. Ervin Stamp.  Mrs. Vern Deichelbohrer and Mrs. Harold Beeler will sell tickets and Mrs. Lawrence Wickie and Mrs. Aft Yeager will take care of the pop stand.   Ralph Millman will serve as policeman.

John Blitgen left Tuesday for Quantico, Virginia, where he will be an instructor in lithography in the Marine Corps school.

Miss Kathy Gallagher was chosen 1970 heritage Day queen in ceremonies Friday evening in the Bellevue grade school.  Grand marshall for the parade was J.R. "Sarge" O'Neill of Miami, who flew to Bellevue Thursday, then returned home via Chicago Monday.  Winner of the Sweepstakes award in the parade was a huge steam locomotive, tender and caboose constructed and entered by the Bellevue Jaycees.

One hundred and ten visitors signed the registry over the weekend at the Young Museum.  Continuing additions and improvements at the museum are attracting repeat visitors as well as first-time guests.

Twelve black children from Chicago are spending this week with 10 Bellevue families under Operation Friendship. They all come from the Martin de Porres School in Chicago.

The Pipeline and Jaycees teams are tied for first place in the Bellevue Softball league standings as play resumes following the Heritage tournament.

Now playing at the Times Theatre in Savanna, 20th Century Fox presents M*A*S*H*, what the new freedom of the screen is all about.

Three Bellevue residents have been chosen as Outstanding Young Men of America for civic and professional contributions to the community. They are James Harvey Humston, Thomas Donald Manderscheid and Steven Jay Lucke.  They were nominated for the honor by local Jaycees. Their biographies will be included in the "1980 Outstanding Young Men of America."

A record amount of electricity was used in Bellevue Monday when the temperature hit 98 degrees.  According to Ray Beschen, superintendent of the local utilities, Bellevue's power demands peaked at 4,300 kilowatts about 6 p.m. Monday. On a normal summer day, about 3,000 kilowatts of power is used locally.

Iowa Corn Fed Girls, Bellevue's girls of country music and amateur entertainment is having quite a year.  The women, Barb Eggers, Sheri Griebel, Carol Scheckel and Julie Scheckel, sing and play country music, dress down and clearly love what they are doing.  They found yet another use for garbage bags, 360 of them.  The women fashioned corn stalks from branches and wrapped the green bags convincingly enough around the limbs to take the sweepstakes float award in the Heritage Days parade at Bellevue last week.  Barb Eggers said the women are toying with the idea, mind you, simply toying, with trucking the unusual float to the Iowa State Fair.

Heritage Day 2000 goes into the books for some benchmarks.  The first Heritage Queen contest to be held at air-conditioned Horizon Hall, and first cancellation of fireworks over the Mississippi.   Almost on cue, rain disrupted the Bellevue Fourth of July parade in progress.  After a sunny interlude for activities at Cole Park, heavy rain returned just as the final preparations were in place for the fireworks display.

"Next to Kevin, this is the best thing I've ever won!" an exuberant and very excited  Patty McClimon told Bellevue Chamber officials after her name was pulled from the wire cage for the 2000 Chevrolet pickup.

The Bellevue Community has started healing after the tragic accident during the annual Fourth of July parade in Bellevue.  A community meeting addresses grief and shock following the parade.  Also, a fund reaches $140,000 for those injured in the parade.

Millions of people have handled Thomas Hipschen's artwork, but few have met the artist behind the stamps they lick and the money they pull out of their wallets.  For 38 years at his job as a United States banknote picture engraver, Hipschen engraved more than 130 postage stamps and the familiar presidential likenesses which grace many of our currency bills.  An open house reception honoring the artist will be held at the Great River Art Gallery.

A few clouds. A stray shower or thunderstorm is possible. Low 69F. Winds SSE at 5 to 10 mph.

Partly cloudy. A stray shower or thunderstorm is possible. High around 90F. Winds S at 10 to 15 mph.