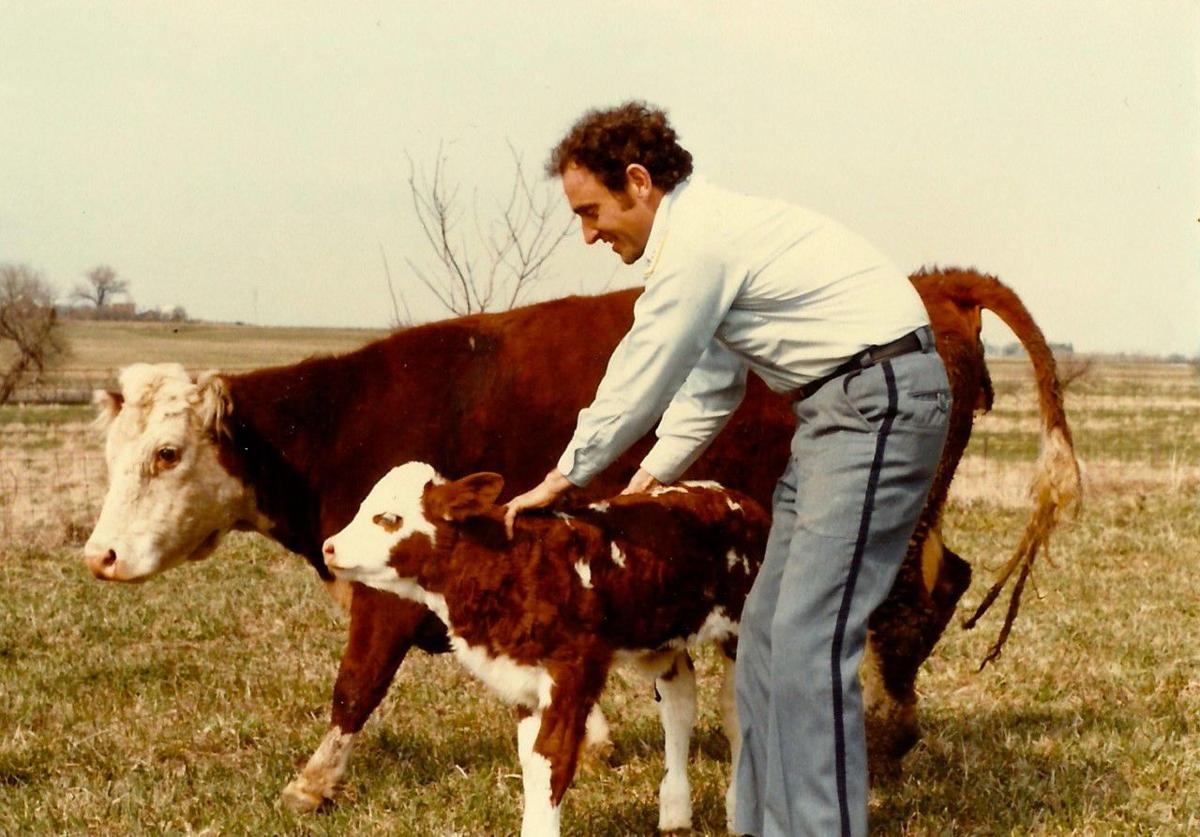 A young Dale Kilburg with one of his beloved cows and her calf. 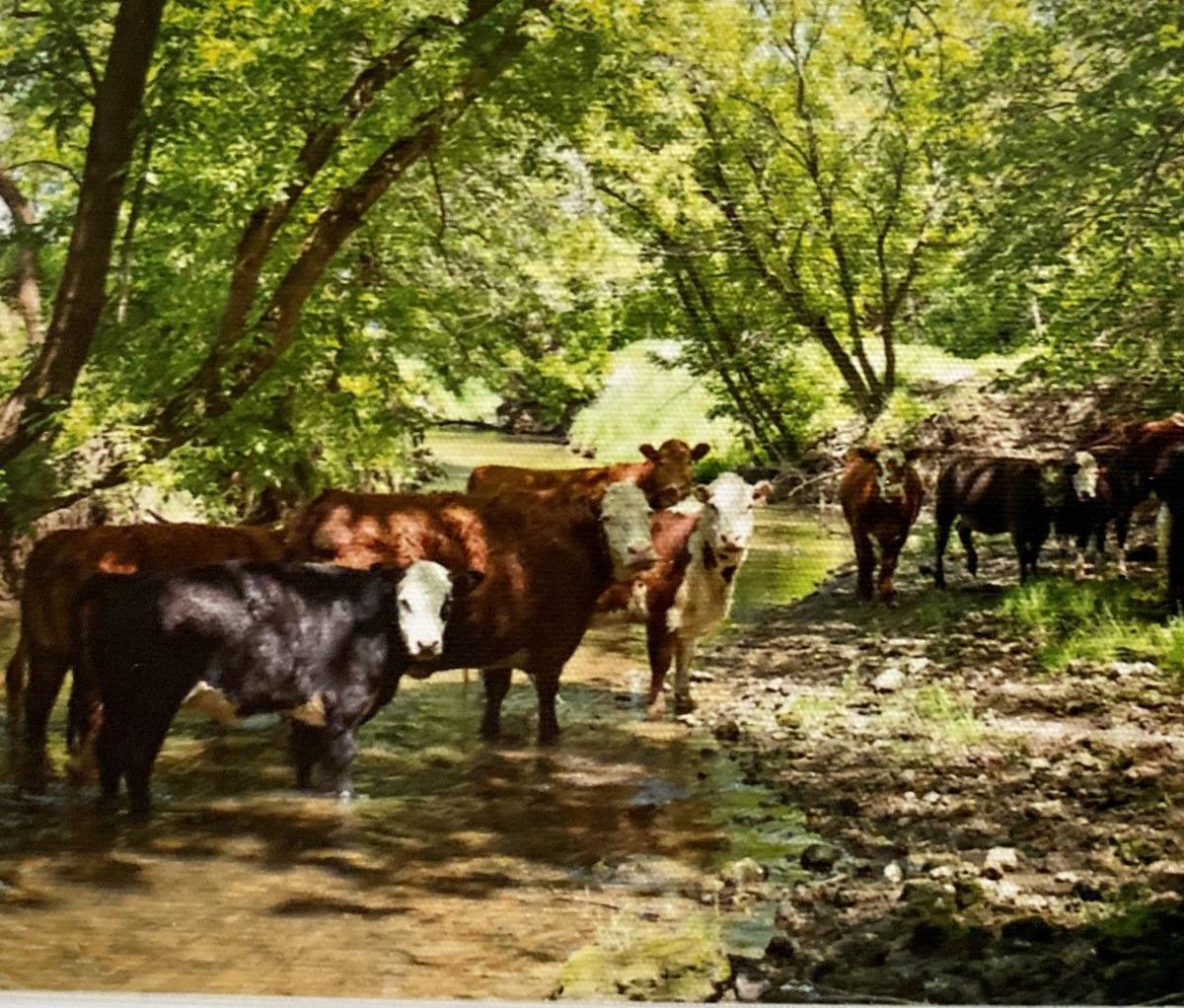 Some of the cows Dale Kilburg raised years ago make themselves at home along a creek bottom.

A young Dale Kilburg with one of his beloved cows and her calf.

Some of the cows Dale Kilburg raised years ago make themselves at home along a creek bottom.

As part of our UpBeat series of stories for people enjoy while they are homebound, here's a piece by local writer Dale Kilburg, a retired postal carrier who continues to work the "family farm.” He has a passion for reading and enjoys writing about the past, so it is no surprise that he has a masters degree in archeology. We will present his work to you in several parts, posting new installments daily. Enjoy!

The old cow was taken completely by surprise.  One moment she was lying with the others (some her daughters) in the thick enveloping darkness on the old familiar spot beneath the burr oak tree, just a stone’s throw away across the level ground from the creek.  A mid-June’s warm rain pattered in the night-dark while a light wind rustled the oak leaves above their heads, the darkness laden with the old familiar sounds, comforting, reassuring.  In the next instant she found herself desperately struggling to gain her feet, her old slow stiff joints matched against the swiftly rising waters around her.  Her younger cow-mates were already scrambling to gain the steep rise just beyond the oak tree, with their hooves flailing frantically to gain purchase on the yielding earth and sod of the steep bank.  The old cow fought hard to escape the muddy, debris-laden waters but away they swept her , she not so much immersed in them, but subsumed, immolated; the cow struggled to keep her head above the water, struggled to breathe… .

The next morning the old farmer glanced out of his farmhouse window, expecting to see little change after the previous night’s light rain.  Stunned, he saw the entire bottom under water, with the road completely submerged and the old creek bridge marshaling a grim lone defense against the torrent of flood waters sweeping around it.   The old man thought, “There must have been more rain—a lot more rain---farther upstream.”  But he did not panic.  When the creek flooded, which it often did, his small cow herd made its way toward the high ground along the corn field fence where he fully expected to see them placidly grazing later in the morning.

About 10 o’clock the man retrieved his spade from the tool shed and went out to cut thistles.  He worked his way through the wet grass to the far corner of the upper pasture where he could view much of the bottom along the creek.  Sure enough, the cows were where he expected them to be, standing in a tight knot in the far corner of the high ground along the fence.  They were safe, but trapped—unable to gain the gate to the upper pasture, a gate he should have left open the preceding night before the rain.  From this distance he could not count them but for now he felt reassured, his previous worries temporarily quelled.

In the afternoon he hauled the big bales to the edge of the hay field in the bright light of a perfect mid-June day.  At 7pm or so, he drove the tractor in and walked down to check the cows, the water now just bank full.  He had opened the gate dividing the pastures in the morning and now he was not surprised to see the cows enter through the gate and approach him.  They came on swiftly, resolutely, with no stragglers, as if escaping a menace.  The cows, descendants of an old dairy herd from the days of the old man’s youth, did not have spring calves.  The old man had intended to sell his small herd late the previous winter but could not bear a final parting from them.  He saw now that one was missing—the mild-natured old cow that should have been in the rear.

In a panic he searched in the remaining daylight for the old cow.  He saw at once the torn ground above the oak tree with its cluster of cow tracks crowded along the fence with the limbs of  ts entwined shrubs broken and torn.  In the thickening dusk he walked as briskly as he could—through the muddy bottom along the creek, along the road fence to the bridge.  There was nothing—no fence wires down, no cow tracks along the road.  And most of all, with a cold, heart-sick feeling, he noted the silence.  Nowhere did he hear a cow, separated from the others, bawling in distress.  It was as if she had suddenly disappeared deep into the bowels of the earth.