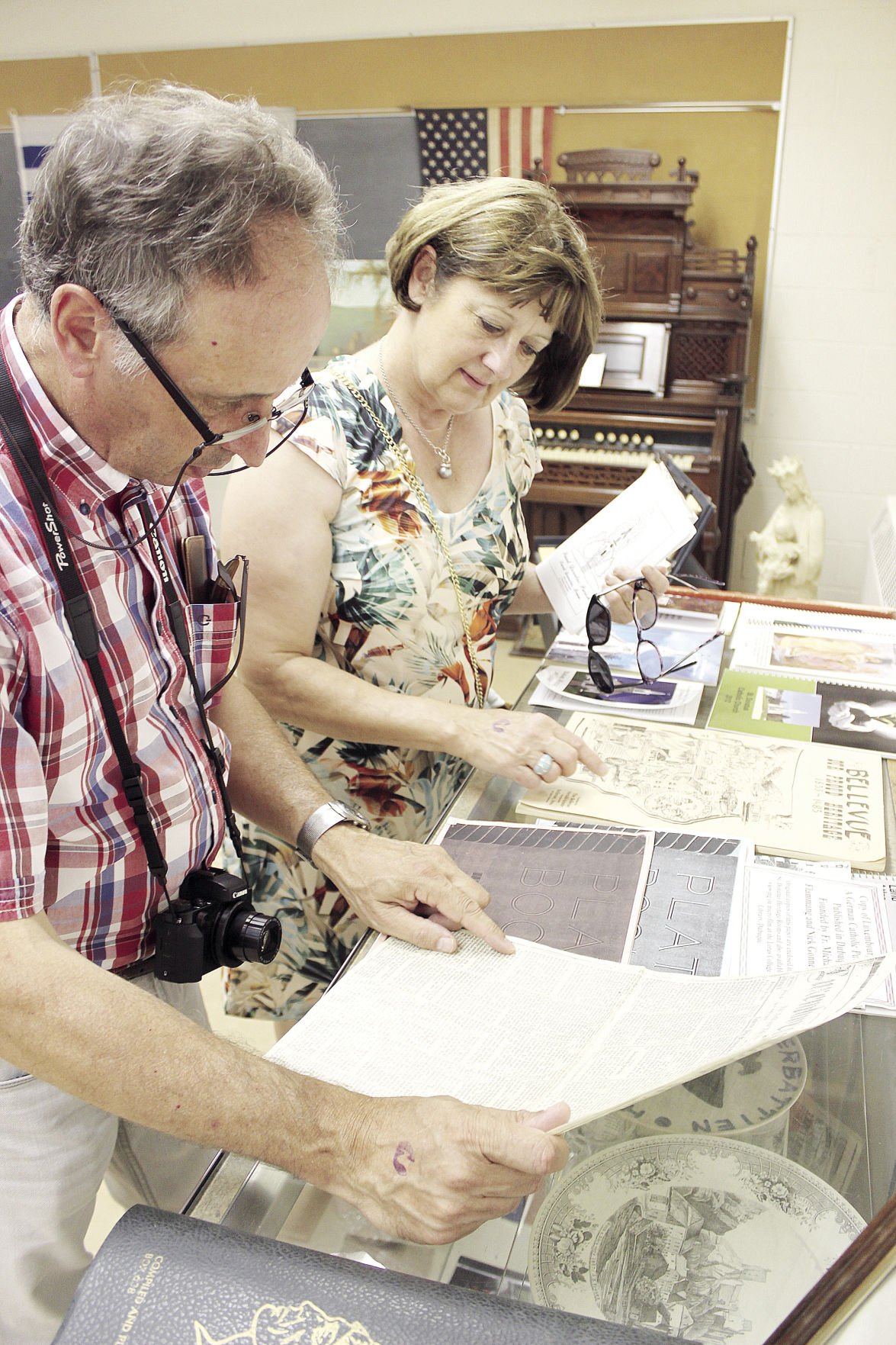 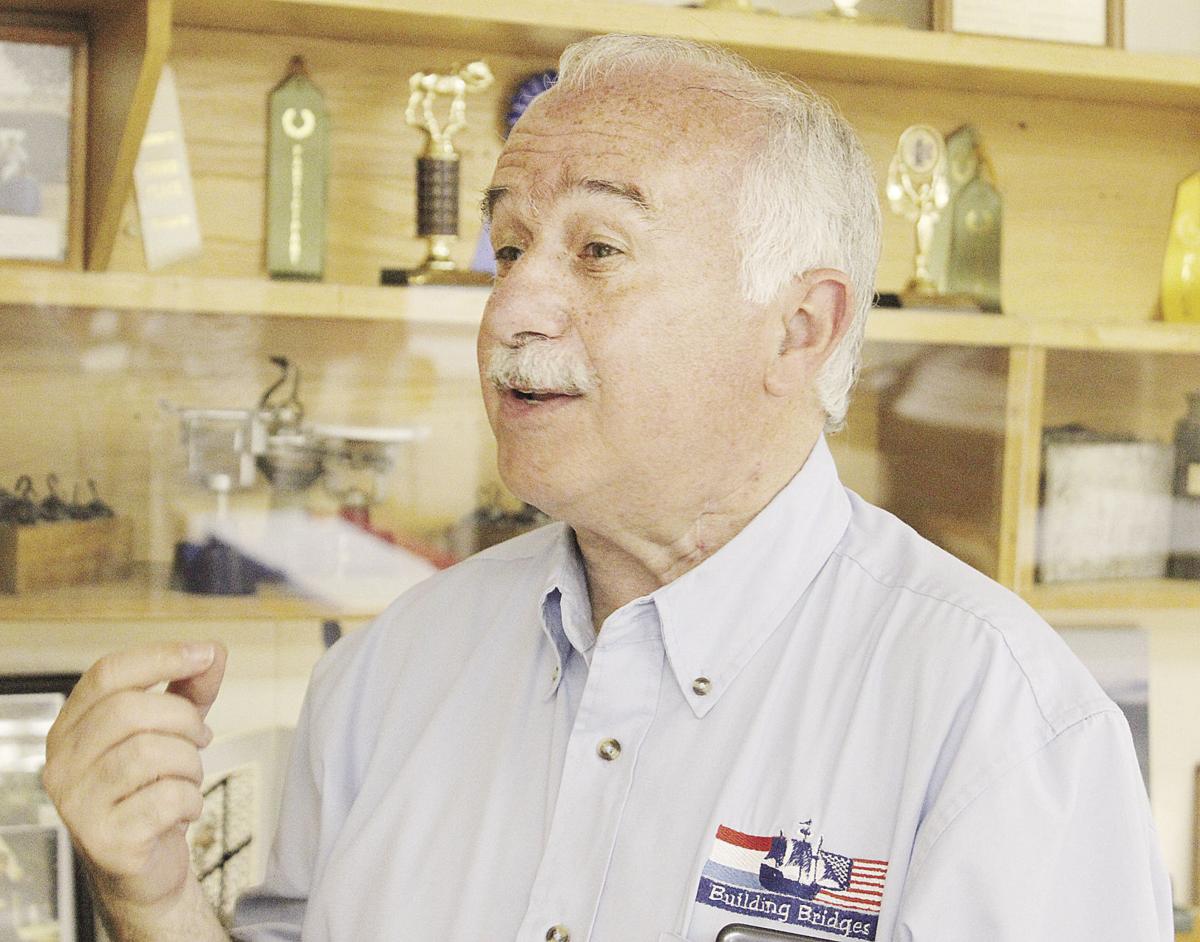 Rene Daubenfeld of Luxembourg was the  leader of the 8-person group traveling to St. Donatus. He has been here several times in the past to research the town’s history.

Rene Daubenfeld of Luxembourg was the  leader of the 8-person group traveling to St. Donatus. He has been here several times in the past to research the town’s history.

The town of St. Donatus hosted a group of European visitors this past Wednesday who hailed from Luxembourg, the very country whose people settled the small Jackson County town in the 1840s.

The group was led by Rene Daubenfeld, who has traveled here several times since 1995 to conduct research about the emigration from Luxembourg to the United States, as well as to visit old friends.

The group took a tour of the St. Donatus Parish Museum near St. Donatus Catholic Church and gathered later at Kalmes Restaurant for dinner.

“I have visited your area many times, so I know some people here - namely the members of the Saint Donatus Luxembourg Heritage Society and others like the Kilburgs and Theisens from St. Catherines,” said Daubenfled, who noted that the group’s main destination was the Luxemburg Fest of America in Belgium, Wisconsin. “I myself am doing research about this immigration for 20 years now. In my database, I have for the moment over 20,000 people that have immigrated to the United States, so there is a strong relationship between the Luxemburgish communities in the Midwest and Luxembourg.”

Daubenfeld said he can understand why people from his country settled here, as the terrain reminds him of his home country.

The town was settled by Luxembourgers over 150 years ago, and it is named after Saint Donatus of Muenstereifel, the patron saint of protection against lightning.

It is known for its status as a Luxembourger village and is populated mostly by descendants of immigrants from Luxembourg.

The current St. Donatus Church was built in 1858, but the interior was remodeled after a fire in 1907. On the right side altar is the shrine of Our Lady of Consolation, also known as Our Lady of Luxembourg (patroness of Luxembourg). Though such a statue normally would be on the left side, it was placed on the right because the parishioner who purchased the new statue after the 1907 fire sat on that side.

The first settler from Luxembourg arrived in the area in 1838 and by 1848 there was a considerable number of Luxembourg families making up St. Donatus. There are 18 original limestone buildings from the 1840s and ’50s still standing, many of them private homes. Some are partly covered in stucco, in Luxembourger style.

One of the old buildings is the 1848 Gehlen House, now a bed and breakfast inn with rooms named after cities in Luxembourg. It was formerly a post office, hotel, trading post, tavern, grocery store, gas station, doll museum and family residence.

The flags of Luxembourg, America and Iowa fly on poles next to the Gehlen House. The stone barn behind the house is believed to be the oldest barn in Iowa.

Luxembourg is a small, landlocked country bordered by Belgium, France and Germany. The country of more than 600,000 people spans about 1,000 square miles

Daubenfeld, who is interested in history and genealogy, learned that the Luxembourg government had once helped restore structures in St. Donatus in the 1980s because of their designs.

Since then, Daubenfeld has brought along groups of Luxembourgers interested in visiting St. Donatus.

“We are always happy to come here and visit, as it is an interesting place and we make new friends all the time,” he said.