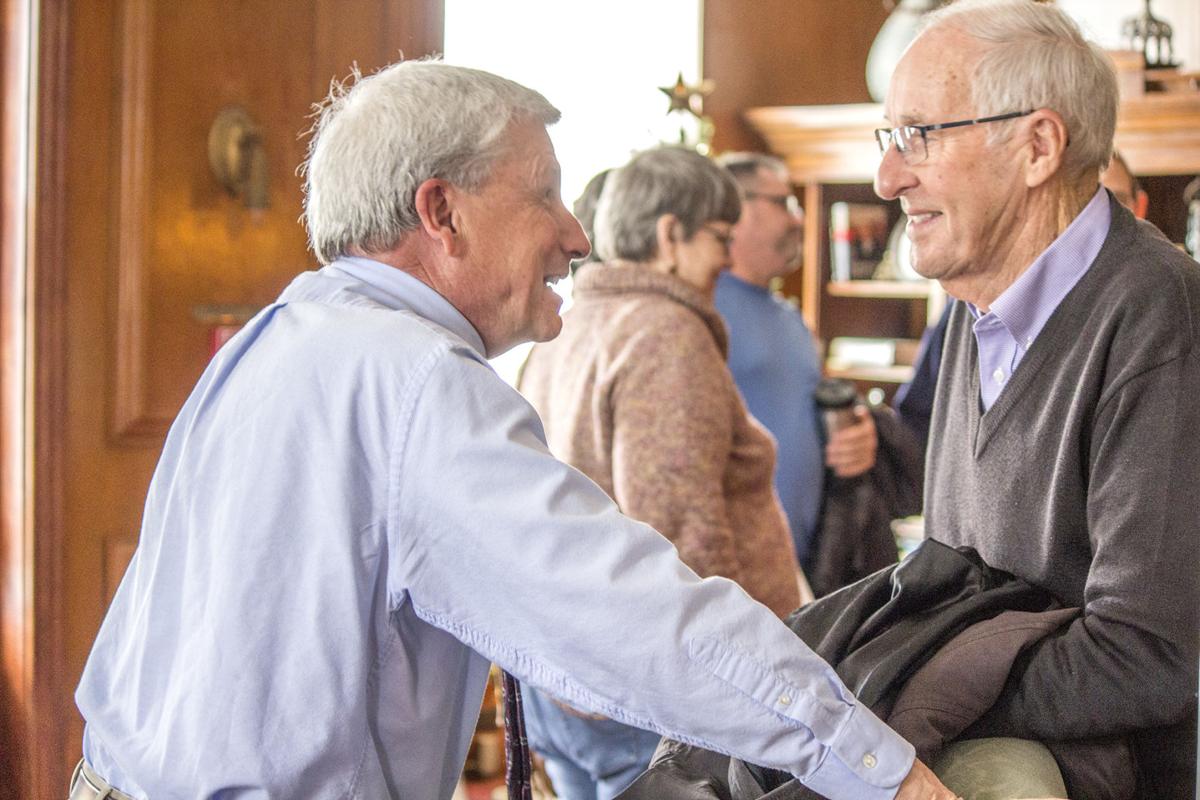 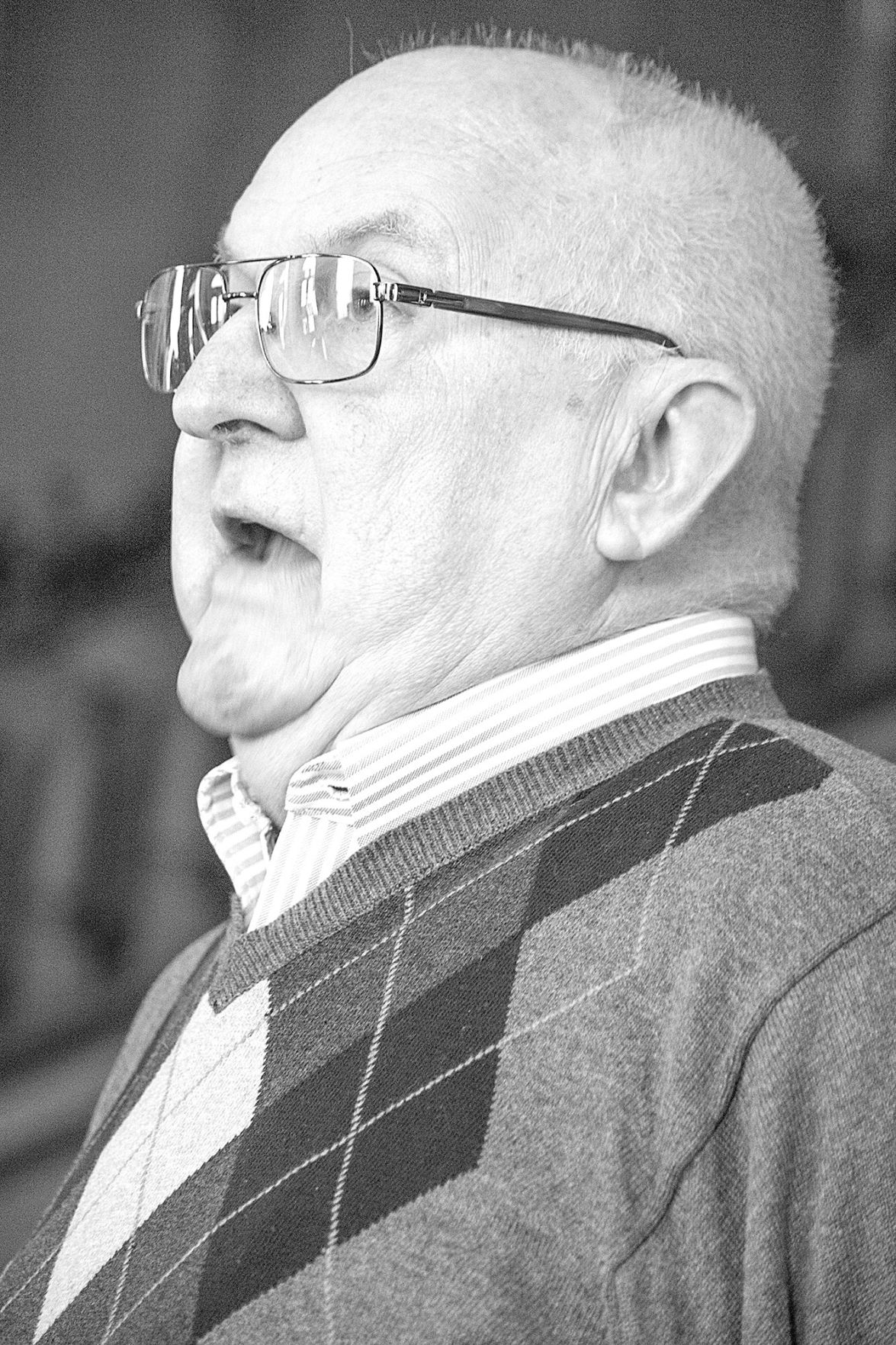 Darwin Schipper of Preston asked local legislators to expand collective bargaining rules in the state. The subject is unlikely to be revisited any time soon, elected officials replied.

Darwin Schipper of Preston asked local legislators to expand collective bargaining rules in the state. The subject is unlikely to be revisited any time soon, elected officials replied.

With the 2020 Iowa Legislative session beginning Jan. 13, about 45 area residents questioned local elected officials about topics most important to them last week in Jackson County.

Some of those topics included increased mental health funding and care, conservation funding, minimum wage, collective bargaining, insulin for all, and career and technical training.

Iowa Rep. Andy McKean, D-Anamosa, and Sen. Carrie Koelker, R-Dyersville, hosted a public pre-session listening post Saturday morning inside the lobby of the Decker Hotel in Maquoketa. The legislators explained some of their priorities for the upcoming legislative session then waded into their constituents’ questions and concerns.

Conservation funding through IWILL may seem to have no correlation with mental health funding, but McKean and Koelker said they support enacting a funding mechanism that would support both.

They support the Iowa Water and Legacy Amendment (IWILL), which voters passed in 2010 as a 3/8-cent sales tax to fund natural resources, clean water and recreation. The legislature never passed that voter-supported increase, but now there is some conversation that a 1-cent sales tax increase to fund the IWILL amendment would leave 5/8-cents to pay for mental health and other services, McKean said.

Retired registered nurse Susan Keeney moved back to Maquoketa this year and said she was “shocked and appalled” that Iowa was ranked 49th for mental health funding.

“I want to move forward” with funding 3/8-cent for conservation and some or a portion of the remaining 5/8-cent tax for mental health care, said McKean, who represents House District 58, including Jackson and Jones counties.

“The governor asked for budgets with and without IWILL, and that’s a good sign,” said Koelker, who represents Senate District 29, including Jackson, Dubuque, and parts of Jones counties.

“This is the year to move forward with IWILL and help mental health, take the cost of providing services for mental health off the backs of taxpayers,” McKean added.

Mayor Richard Betts of Preston said it “blows my mind” that Iowa closed so many state mental health institutions. That led to many mentally ill people committing crimes and going to jail, he said.

“When we take our mental health people and put [them] in our jails, we have to increase the size of our jails because the state isn’t doing anything for those people,” Betts added. He asked legislators if the 5/8-cent tax would help with jail overcrowding issues as well as mental health care.

McKean agreed that the state’s mental health institutes have become the state’s penal institutions. The state has only about 68 mental health beds, which is “very troubling,” McKean said. In Jackson County, for instance, if someone is arrested and needs mental help, sheriff’s deputies may need to drive them as far as Sioux City for care.

Back to the topic of conservation funding, Koelker and McKean also said they support renewing the REAP (Resource Enhancement and Protection) program. Iowa lawmakers, including McKean, enacted the REAP program in 1989. The program, which has funded 198 projects in Jackson, Clinton, Cedar, Dubuque and Delaware counties, expires in 2021 unless the Iowa Legislature votes to extend or expand the conservation program.

Iowa’s minimum wage is $7.25 per hour, a wage Maquoketa resident Kathy Geronzin told legislators is not “livable” and should be raised.

“Nowhere in the United States can someone work for that and pay for a two-bedroom apartment,” she said Saturday, suggesting a $15 minimum wage even if it was implemented gradually.

“Minimum wage was not created to be a living wage,” Koelker said. “Look up and down Main Street. Do you know how many of these businesses would close in rural Iowa because they can’t afford to pay that much?”

Roger Stewart countered Koelker’s statement. He was a state senator when the Iowa Legislature voted to up the minimum wage to $7.25.

“We were told many businesses would close across Iowa, and they didn’t,” Stewart said, advocating a gradual wage increase.

“At least some increase” is needed, McKean said, adding that he would not support a “dramatic” increase like $15 per hour.

Veterans needs: Terry Creegan, a military veteran, former county Veterans Affairs director and school board member, shed light on a specialized veterans court that could help to reduce the number of mentally ill veterans in the state’s jails. Koelker and McKean expressed an interest to hear more and perhaps craft legislation to promote it.

5 of the biggest data breaches​

Creegan said some states such as Wisconsin set up veterans courts. For example, say a person is arrested and jailed. If law enforcement can identify that person as a military veteran, then the local veterans affairs director can get involved, assess the situation, and try to obtain whatever help the veteran needs, such as mental health care. Creegan explained that federal programs would pay to assist that veteran, possibly at no expense to the county or state.

“I could get a bill together for that,” Koelker replied.

McKean said it was “highly unlikely” that collective bargaining would be discussed “any time soon.”

Insulin for all: Janelle Lutgen of Bernard implored the legislators to advance Kevin’s Law, named for her son who died after rationing his insulin to treat Type 1 diabetes.

Last year, Koelker and McKean sponsored bills that would allow someone to receive a one-month supply of emergency insulin without a prescriber’s authorization. The current law in Iowa only allows up to a 72-hour emergency supply of a prescription drug, but insulin is not packaged in 72-hour quantities.

The Iowa Legislature could not agree on the bill.

“It’s a disgrace what people pay for insulin,” McKean said, noting that sponsoring the “insulin for all” bill last year gave him an “eye-opening” look at the power of the health insurance companies in Iowa and the nation.

Koelker said the insulin bills “still have life this year.”

Career/tech education: Dan Kiley teaches industrial technology at Anamosa High School. The shift from funneling all graduates to four-year schools is ending, and community colleges are gaining more attention and funding for career and technical courses.

Kiley urged legislators to funnel some of that funding, such as from Gov. Kim Reynolds’ Future Ready Iowa program, into high schools such as his that are preparing students for more immediate careers in welding and other technical careers.

That prompted support from Koelker and McKean, who also agreed that high schools need to teach more in-depth courses in home economics and financial literacy.

Medical aid in dying: Derith Vogt of Center Junction and Joyce Finn-Dirks of Anamosa, members of Compassion & Choices Iowa, asked Koelker and McKean to consider legislation supporting medical aid in dying. Medical aid in dying consists of a doctor administering medication to patients at the end of life, at their request, in order to relieve their suffering by bringing about their death.

“People need to discuss that [death] happens and none of us get out of it alive,” Vogt said.

Koelker offered no comment on the issue, and McKean said he was willing to learn more about the issue even though he was not yet willing to “put his name on it.”

Both Koelker and McKean advocated bipartisan efforts this session.

One year ago when they hosted the pre-session listening post, both legislators were registered Republicans. Last April, McKean switched parties and is now a registered Democrat.

“It’s maybe a little unusual for a Democrat and Republican to get together to host one of these things,” McKean said, drawing laughter from the assembly.

Both legislators said workforce development and rural economic development and revitalization topped their list of priorities for 2020. Attracting people to rural Iowa is also a priority, as well as adding and enhancing any amenities that would assist that goal, including better parks and tourism, more childcare, affordable housing, and more critical thinking in education.

McKean remained confident that the state’s IPERS [Iowa Public Employees’ Retirement System] is “strong and sustainable. We’re gonna keep it,” he said, after some politicians and other groups lobbied to change the system last year.

In the last two sessions, McKean introduced a bottle bill that would have added more plastic drink bottles to the redemption list and give 1 cent more per container to redemption centers, but the measures didn’t pass. It’s on his 2020 priority list again.

So is campaign reform. McKean said he plans to introduce legislation that would: create non-partisan county elections, promote voluntary campaign spending limits, and force campaigns to tell where campaign funds come from.

Becoming windy with showers likely in the afternoon. High near 45F. Winds NW at 20 to 30 mph. Chance of rain 40%. Winds could occasionally gust over 40 mph.