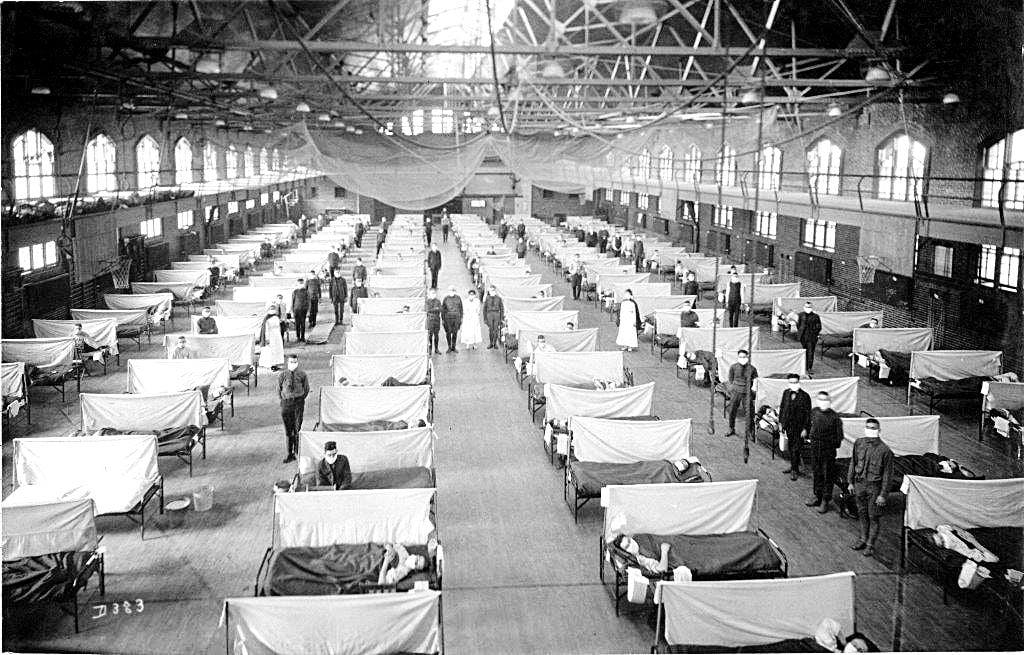 THE IOWA STATE UNIVERSITY FIELD HOUSE in 1918, served as a place to treat Spanish Flu victims from across Iowa. More than 6,000 Iowans died in a matter of months, but a majority survived the rare pandemic. (Photo courtesy of State of Iowa Historical Society - the Annals of Iowa). 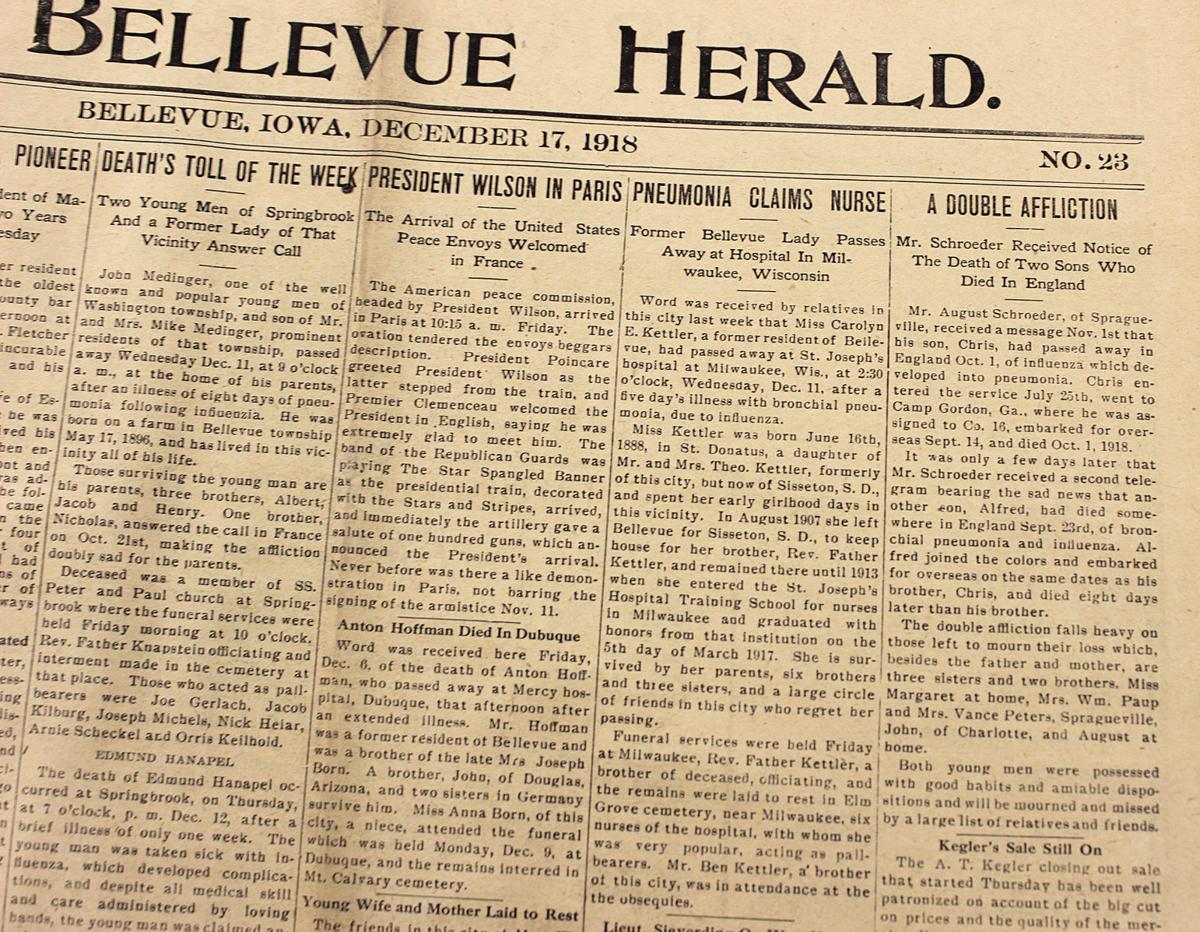 FRONT PAGE STORIES in late 1918 like this issue on Dec. 17, told of local deaths from influenza each week for about three months.

THE IOWA STATE UNIVERSITY FIELD HOUSE in 1918, served as a place to treat Spanish Flu victims from across Iowa. More than 6,000 Iowans died in a matter of months, but a majority survived the rare pandemic. (Photo courtesy of State of Iowa Historical Society - the Annals of Iowa).

FRONT PAGE STORIES in late 1918 like this issue on Dec. 17, told of local deaths from influenza each week for about three months.

With the sudden worldwide pandemic of the Covid-19 virus alarming the entire nation and hitting the local economy hard, we are reminded of how history repeats itself, and can easily give examples by diving deep into the Bellevue Herald-Leader archives from over 100 years ago.

Although local soldiers from Bellevue and Jackson County serving in France during World War I was the main news coverage of the Bellevue Herald in 1918, newspaper pages, starting in October 1918, were replete with stories about people dying and sick from the highly contagious Spanish influenza.

In the days before penicillin, the epidemic killed an estimated 21 million worldwide — 548,452 in the United States, or 10 times the number who died in the first world war.

In October of that year, the flu hit Iowa hard. In the next three months, it would kill more than 6,000 Iowans.

Here in Bellevue, the total number of people who died isn’t known, but on virtually every front page each week from late October 1918 to January 1919, there were one to three deaths recorded as a result of the Spanish flu. At the time, the Bellevue Herald just called it influenza or ‘the Grip.’

Unlike today’s pandemic, however, businesses were open in Bellevue and people were out celebrating the end of World War I in November of 1918. Articles on prevention and of the epidemic itself were non-existent, as the newspaper simply reported who died and when their funeral services were.

According to the newspaper accounts, the illness almost always was coupled with pneumonia. First, the flu would weaken a person’s immune system, then pneumonia would set in. Alarmingly, most of the victims were 20 to 40 years old.

While Bellevue stayed open, Dubuque’s 300 cases and 10 deaths by Oct. 12 prompted authorities to declare that city closed. It was the first time in the city’s history that church services were not held.

A woman who lived through the epidemic as a child told Iowa State University that children came up with a macabre playground rhyme: “I had a little bird, its name was Enza, I opened the window and in flew Enza.”

In Iowa, the state Board of Health said a statewide quarantine would be impossible under the law. But after 14,000 cases were reported by mid-October in 1918, the board wrote the U.S. surgeon general asking for just that.

In the meantime, all public funerals were banned. When the federal government OK’d a statewide quarantine, all public gatherings were ordered halted.

Iowa Gov. William L. Harding at the time was campaigning for re-election around the state but had to cancel speeches in Oelwein, Atlantic and Cedar Rapids. Then he, too, got the flu.

By the end of 1918, the worst was over, though the Spanish flu reappeared in the nation — and Iowa — several times until it disappeared in early 1920. But the worst year was 1918.

Patients were treated in mass make-shift hospitals, set up in gymnasiums and auditoriums at college campuses, including Iowa State University in Ames during the time.

More than 93,500 people statewide had been counted as sick from the flu.

The 1918 influenza pandemic was the most severe pandemic in recent history. It was caused by an H1N1 virus with genes of avian origin. Although there is not universal consensus regarding where the virus originated, it spread worldwide during 1918-1919.

In the United States, it was first identified in military personnel in spring 1918. It is estimated that about 500 million people or one-third of the world’s population became infected with this virus. The number of deaths was estimated to be at least 50 million worldwide with about 675,000 occurring in the United States.

Mortality was high in people younger than 5 years old, 20-40 years old, and 65 years and older. The high mortality in healthy people, including those in the 20-40 year age group, was a unique feature of the pandemic.

The Spanish flu pandemic of 1918, the deadliest in history, infected an estimated 500 million people worldwide—about one-third of the planet’s population—and killed an estimated 20 million to 50 million victims, including some 675,000 Americans. The 1918 flu was first observed in Europe, the United States and parts of Asia before swiftly spreading around the world. At the time, there were no effective drugs or vaccines to treat this killer flu strain. Citizens were ordered to wear masks, schools, theaters and businesses were shuttered and bodies piled up in makeshift morgues before the virus ended its deadly global march.

A flu pandemic, such as the one in 1918, occurs when an especially virulent new influenza strain for which there’s little or no immunity appears and spreads quickly from person to person around the globe.

The first wave of the 1918 pandemic occurred in the spring and was generally mild. The sick, who experienced such typical flu symptoms as chills, fever and fatigue, usually recovered after several days, and the number of reported deaths was low.

However, a second, highly contagious wave of influenza appeared with a vengeance in the fall of that same year. Victims died within hours or days of developing symptoms, their skin turning blue and their lungs filling with fluid that caused them to suffocate. In just one year, 1918, the average life expectancy in America plummeted by a dozen years.

Despite the fact that the 1918 flu wasn’t isolated to one place, it became known around the world as the Spanish flu, as Spain was hit hard by the disease and was not subject to the wartime news blackouts that affected other European countries. (Even Spain's king, Alfonso XIII, reportedly contracted the flu.)

One unusual aspect of the 1918 flu was that it struck down many previously healthy, young people—a group normally resistant to this type of infectious illness—including a number of World War I servicemen.

In fact, more U.S. soldiers died from the 1918 flu than were killed in battle during the war. Forty percent of the U.S. Navy was hit with the flu, while 36 percent of the Army became ill, and troops moving around the world in crowded ships and trains helped to spread the killer virus.

By the summer of 1919, the flu pandemic came to an end, as those that were infected either died or developed immunity.