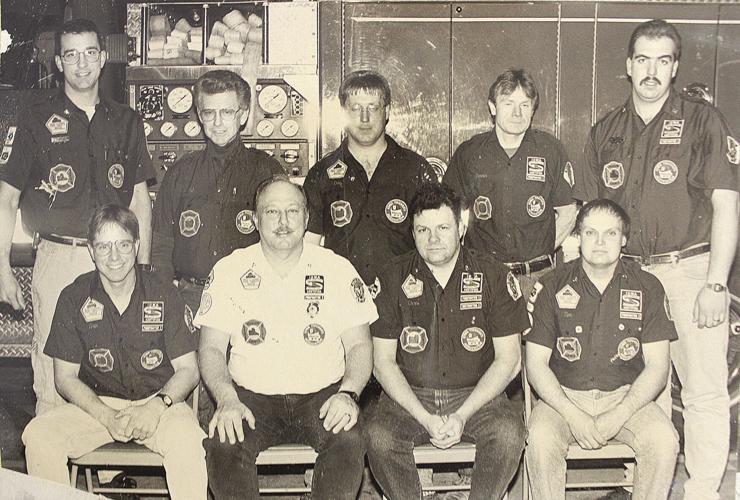 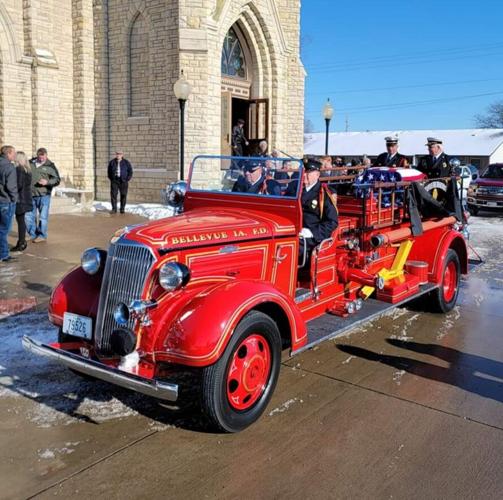 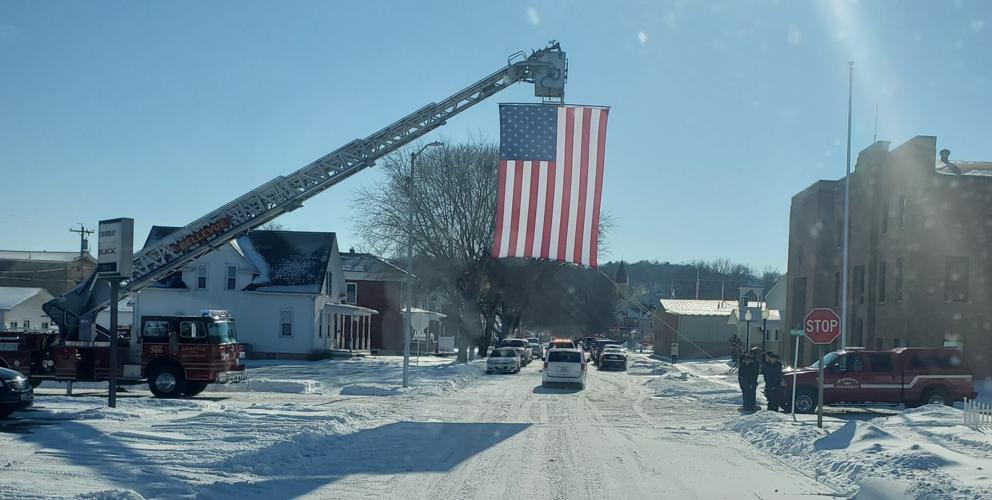 Gary Griebel, who passed away on January 9, 2022, was honored for his service to the community by the Bellevue Fire Department this past weekend with a special Firemen’s Tribute.
Griebel, who also served on the Bellevue Community School Board for 25 years, served on the Bellevue Fire Department for nearly 40 years, and was Fire Chief from 1984 to 1998.
He also helped re-organize Jackson County Firemen’s Association, according to current Bellevue Fire Chief Kent Clasen, who coordinated the traditional ceremonies, complete with black and purple banners hung outside the fire station to the retirement of the gear ceremony to delivering Griebel to his final resting place at St. Joseph’s Cathoic Cemetery on the back of the department’s 1937 fire engine.
“Gary was very dedicated member and he brought many new ideas to the department,” said  Clasen. I learned a lot from Gary and consider him one of my mentors and still use some of the ideals of his leadership. Along with the fire department Gary served his community whole heartedly and gave the same dedication to everything he was involved in.”
Bellevue Superintendent Tom Meyer also reflected on Griebel’s role in the school and community.
“Gary was involved with many crucial decisions in the Bellevue Community School Distict as a Board member and Board President. Gary  always wanted to be well-informed about topics of discussion, as he consistently made decisions on what would be the best for the students,” said Meyer. “Gary also advocated for our entire school system at the local and state level, and was a strong leader not only in our school system but in the entire community.”

Griebel was born March 28, 1949 in Bellevue, and graduated from Marquette High School in 1967.  He retired from Dubuque John Deere Works in 2003.
According to his obituary, Griebel’s passion was serving his community.
He served on the Bellevue Fire Department for 38 years and on the Bellevue Community School Board for 25 years (serving as President for several terms); and was also Grand Knight of Knights of Columbus of Bellevue, Hospice of Jackson County board member, St. Joseph’s School Board member and a member of the Jackson County 911 Board. He was also a longtime member of St. Joseph’s Catholic Church in Bellevue.
The unique send-off by the Bellevue Fire Department, is a tradition followed since the beginnings of the department over 150 years ago.
“The fire service is rich with ceremony, custom and tradition. Our custom of rendering final honors has its origins in the fire department of the city of New York, where many years ago, long before the advent of radios or pagers, fire alarms and daily announcements were dispatched from central headquarters to outlying firehouses by a system of bell commands and by telegraph,” explained Clasen, who noted that each different type of alarm or announcement would have its own number and series of bell strikes.
“When a firefighter died in the line of duty or when some important official or personage died, headquarters would transmit five bell strikes, repeated in four series, with a slight pause between each series, followed by the announcement. This was done as long ago as 1865 in the New Your City Fire Department to inform the rank and file of the death of Abraham Lincoln,” explained Clasen. “The custom has continued down to the present day and this form of rendering final honors to departed comrades is known in the fire service as “striking the four fives.”

Overcast. A stray shower or thunderstorm is possible. High 67F. Winds NW at 5 to 10 mph.