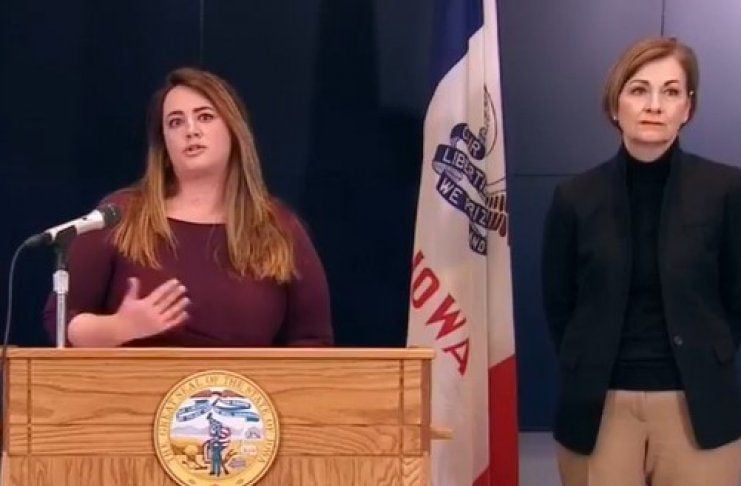 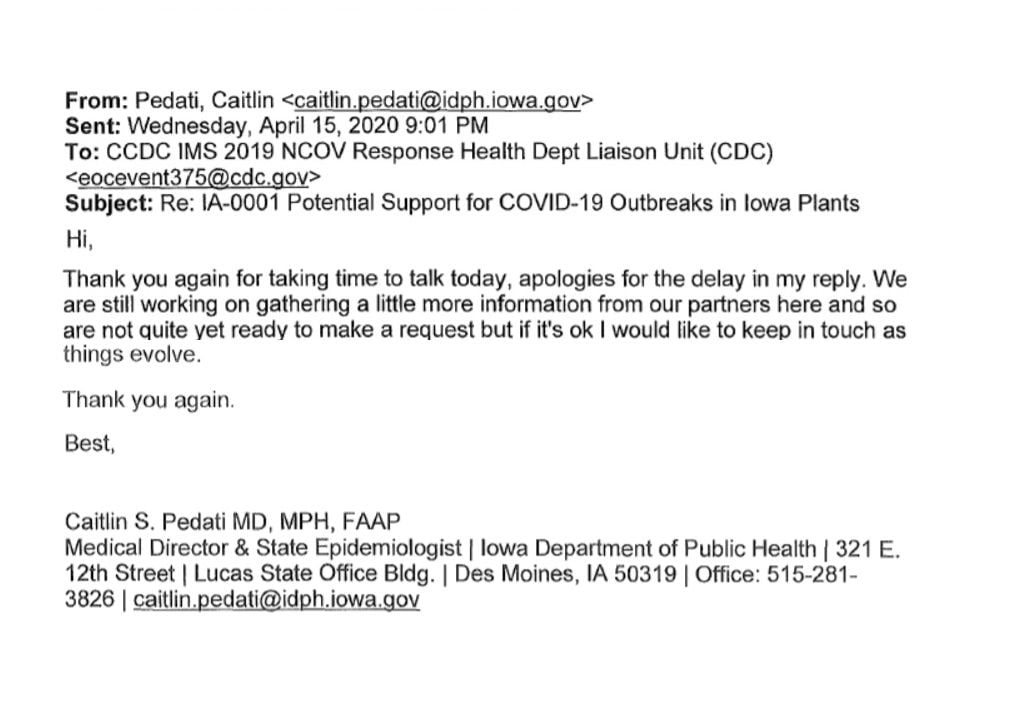 Email from Dr. Caitlyn Pedati to the CDC 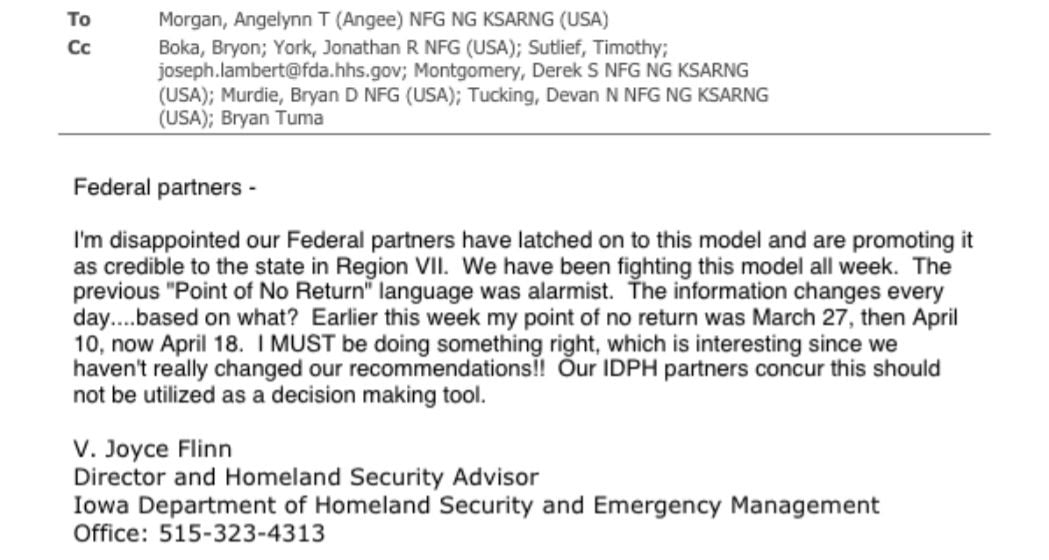 Email from Dr. Caitlyn Pedati to the CDC

Emails between state and federal officials during the early weeks of the COVID-19 pandemic point to confusion and serious disagreement over testing, equipment and the projected spread of the virus.

The emails, obtained through a public records request made by the government-watchdog organization Accountable U.S., also suggest the state of Iowa initially rejected an offer of federal assistance to help address deadly outbreaks in meatpacking plants.

In one email, Iowa’s head of homeland security said the federal government’s early projections on the spread of the virus weren’t “credible” and dismissed them as not worth consideration.

Officials in Kansas wrote back, questioning the way FEMA had characterized the state’s mitigation efforts. In a separate email, one Kansas state official labeled the modeling “insulting.”

Flinn wrote: “I am disappointed our federal partners have latched onto this model and are promoting it as credible … We have been fighting this model all week … The information changes every day — based on what?”

In her email, which was sent to state officials in Kansas and elsewhere, Flinn said the Iowa Department of Public Health agreed with her that the FEMA modeling “should not be used as a decision-making tool.”

Flinn did not respond to a call from the Iowa Capital Dispatch seeking comment on the emails.

On March 29, Flinn wrote to FEMA on a different issue. She was trying to determine whether ventilators made by G.E. Healthcare at President Trump’s directive now had to be ordered through the FEMA or the U.S. Department of Health and Human Services.

“There is email traffic flying around that based on the new GE directive from the president that all ventilators will be requested through FEMA/HHS,” Flinn wrote. “Can you advise if that is factual or can we still attempt to procure on our own?”

A FEMA administrator, Paul Taylor, wrote back: “There is no prohibition on states ordering anything they need to fight COVID. And, as discussed in the past, HHS or FEMA will work out appropriate reimbursement. However, with some critical items, including ventilators, FEMA is closely managing the national supply chain right now, especially since the Defense Production Act was triggered with GE, and other suppliers. So, feel free to pulse suppliers, while also pushing your equipment needs to us…”

By that time, Iowa hospitals were having trouble acquiring personal protective equipment, or PPE, for their workers.

On April 7, the purchasing agent for the UnityPoint network of hospitals ordered 100,000 isolation gowns from a supplier called Pinnacle MX.

Two days later, on April 9, a Pinnacle MX executive contacted UnityPoint by email and warned that that FEMA  was seizing private shipments of PPE and reallocating them to counties deemed to be more in need.

“Hence, there is a realistic chance that your order might not make it to your (loading) dock,” the executive wrote. “I apologize for being the bearer of potentially bad news …”

Within a few hours, the Pinnacle MX email had circulated among other UnityPoint administrators, generating concern with one of them noting a “critical need” for gowns. Another UnityPoint administrator asked a colleague, “Can you find out if this is fact or fiction — i.e., is the government inserting themselves in the supply chain and confiscating inventory to send to hot spots?”

UnityPoint’s CEO, Kevin Vermeer, weighed in, stating, “I think at the very least we need to make sure the governor is well aware of this situation not just in theory but what we are seeing on the ground. Based on what I read (similar to what you attached), it’s fact, not fiction.”

Before noon that same day, the chain of UnityPoint emails had been forwarded to Iowa Gov. Kim Reynolds’ deputy chief of staff, Paige Thorsen.

At 3:49 a.m. the next day, April 10, Thorsen sent a pre-dawn email to Flinn and Stephanie Groen, Iowa’s director of state and federal relations, asking whether all of Iowa’s PPE orders were being intercepted.

Before they could respond, the Iowa Department of Public Health issued an order requiring Iowa’s health care providers to extend the normal use of their face masks and gowns to conserve supplies.

Later that same day, Flinn wrote back to Thorsen saying she had talked to FEMA administrator Pete Gaynor and “according to him, FEMA is not buying up all the PPE.”

Groen offered her own take on the matter. She wrote: “It’s my understanding that this was happening in the beginning, but the feds are now stepping out of buying PPE (because) the governor’s have been complaining about this being an issue. The feds are still ensuring that we can get shipments from other countries by facilitating flights, etc., but they should no longer be purchasing.”

Flinn then sent Groen a list of PPE suppliers and noted “gowns are in very short supply! Shipping from China.”

Iowa holds off on CDC offer to assist with meatpacking outbreaks

A week later, on April 15, Iowa’s state medical director, Dr. Caitlin Pedati, wrote to the Centers for Disease Control and Prevention’s regional COVID-19 response team about a rapidly growing issue in Iowa: infections at Tyson Foods and the state’s other meatpacking plants, where employees often worked shoulder to shoulder. Pedati asked if she could “talk to someone about potential support for COVID-19 outbreaks in plants in Iowa.”

A CDC representative wrote back and asked for information on the number of Iowa plants involved and the number of infections. She also asked whether Pedati was seeking an onsite form of assistance or virtual help.

Pedati wrote back to say she would be seeking onsite assistance, but didn’t provide any of the requested information on the Iowa outbreaks. Instead, she suggested she and the CDC official speak by phone.

Several hours after the phone call took place, Pedati wrote to the federal agency again, this time to say she wouldn’t be seeking the CDC’s assistance with the meatpacking plants, at least for now.

She wrote: “We are still working on gathering a little more information from our partners, and so are not quite yet ready to make a request but if it’s OK I would like to keep in touch as things evolve.” (“Partners” is a word frequently used by Gov. Reynolds to refer to the meatpacking industry.)

Five days later, on April 20, during her then-daily news conference, Gov.  Reynolds said publicly she had “been on the phone with the CEO and the management team for all Tyson plants to talk about what they’re doing proactively to make sure that they’re protecting their workforce, the strategies that they put in place to mitigate, to let them know that we do have the capacity to do surveillance testing.”

Nine hours after Reynolds’ press conference, the same CDC official Pedati had spoken to earlier wrote to Pedati and again offered the federal agency’s assistance with the meatpacking plant outbreaks in Iowa.

The CDC official noted that in other states the CDC was helping in the meatpacking plants by coordinating the response and assisting with contact tracing, data entry, employee screening, foreign language barriers and other issues.

The available records give no indication of whether, or how, Pedati responded. An Iowa Department of Public Health spokesperson did not respond to questions from the Iowa Capital Dispatch about the CDC’s offer.

Within two weeks of Pedati’s exchange with the CDC, more than 1,600 workers at four Iowa meatpacking plants would be infected with COVID-19.

On April 30, Ginger Kennicker, a U.S. Department of Agriculture official who supervised the federal inspectors at the Tyson plant in Waterloo, wrote to the Iowa Department of Public Health with a concern.

The inspectors had been tested at the plant for COVID-19, Kennicker wrote. The team’s arrangement with Tyson called for the results of the tests to be communicated directly to the inspectors and to the county health department. “They are the medical records of USDA personnel, not Tyson,” Kennicker noted. “(The test samples) were placed in coolers marked USDA and our orders were marked USDA with red ink.”

Despite that, Kennicker wrote, the test results — which showed one of the inspectors was positive for COVID-19 — were reported to Tyson itself, not to the USDA or the individual inspectors.

“Based on individual testing when inspectors were off work sick, and the one Friday positive, we have had 10 confirmed positives in April among 38 employees,” Kennicker reported.

Ann Garvey, the deputy state epidemiologist, responded, saying she hadn’t been aware of the testing. “At this point,” she wrote, “I am not sure there is anything I can do about the testing that has occurred … We are offering the testing as a voluntary option for plants, so it’s you and the plant’s decision on whether you want USDA staff tested moving forward.”

Kennicker then explained that while there didn’t appear to be any group testing of the inspectors going on, if IDPH were to ask that the inspectors in certain plants be tested, it would happen.

Within a few weeks of that exchange, the state began curtailing its reporting of outbreaks in the meatpacking plants. Initially, the Iowa Department of Public Health said it would announce outbreaks at any plant where more than 10% of the workers tested positive.

Gov. Reynolds then said such outbreaks would only be reported by her administration if reporters first asked about them.

“I trust the media to do their job and continue to ask the questions,” she said at a May 26 press conference. “We’re being as transparent as we can in providing Iowans with about as much information as we can … The media will do their part, and we’ll do ours.”