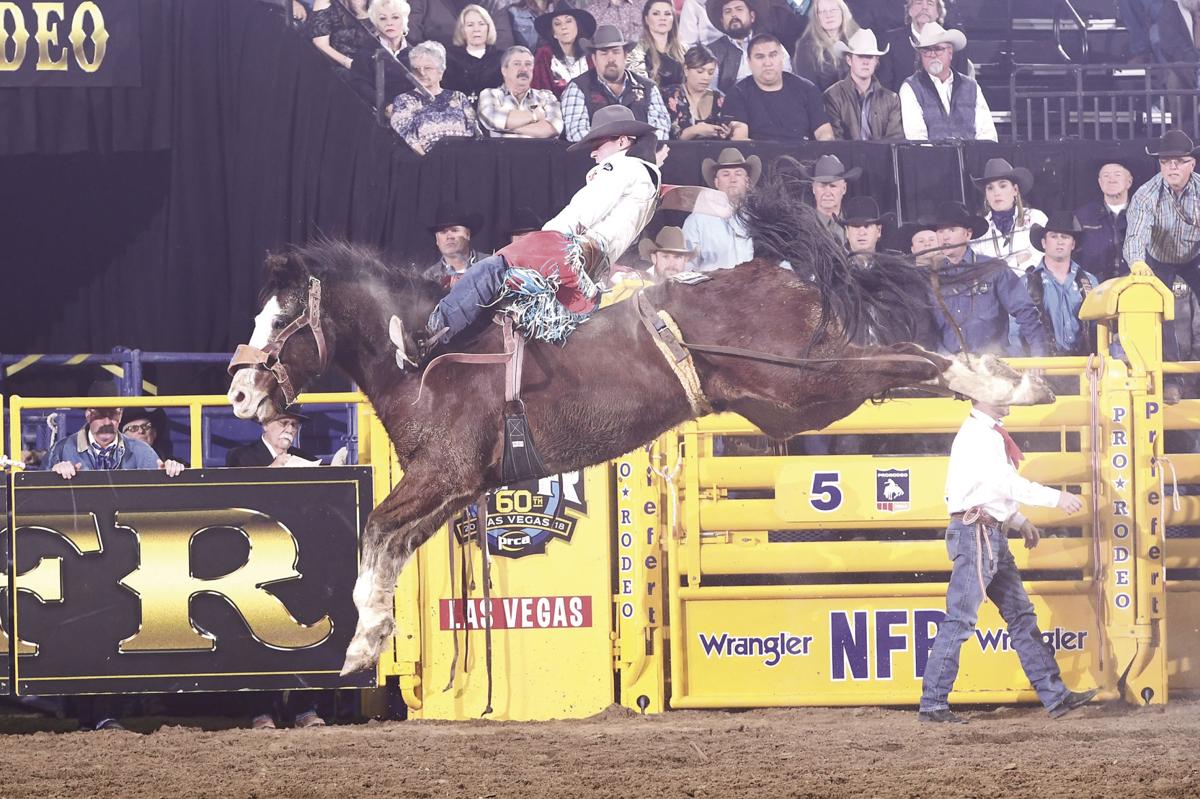 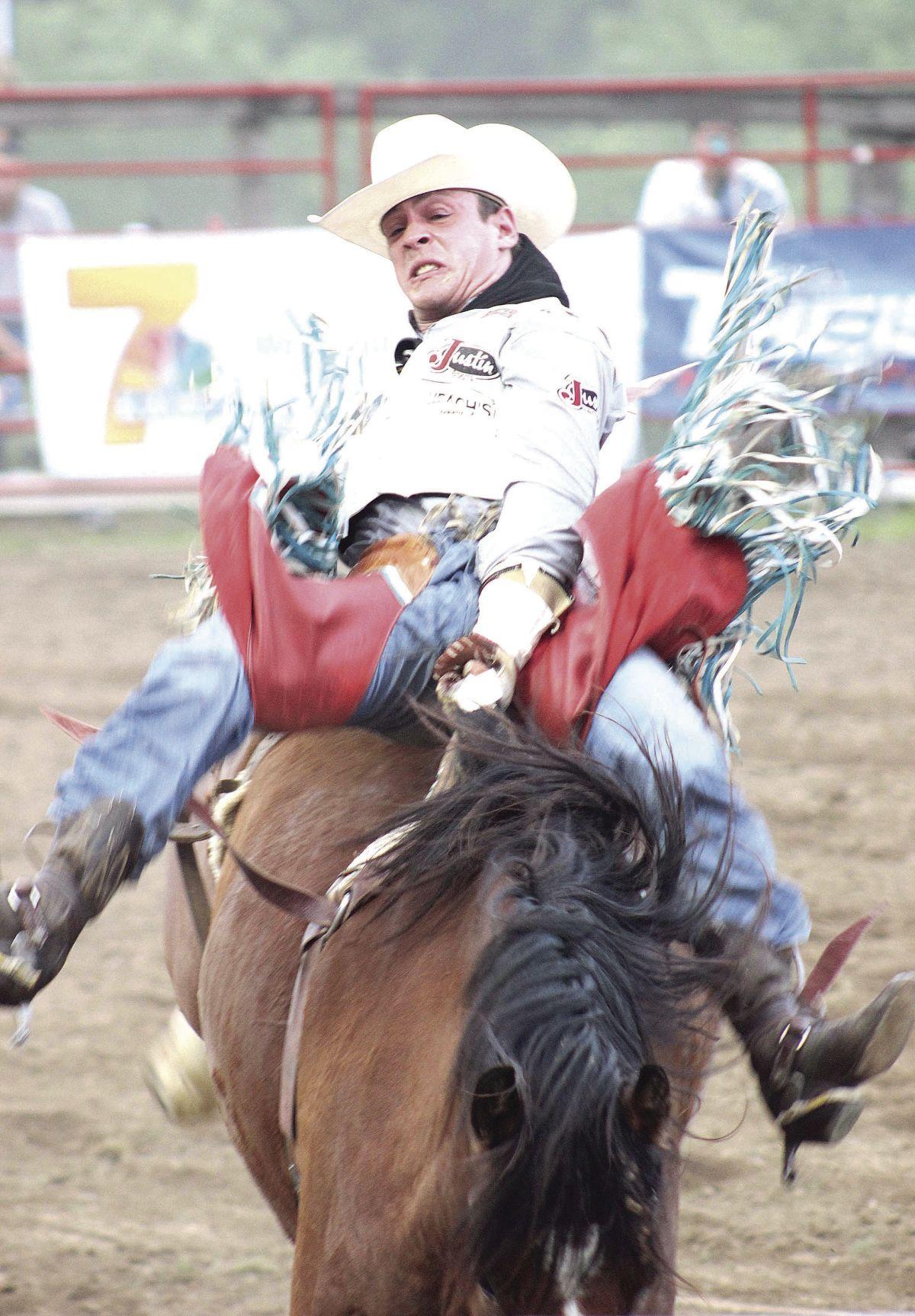 TIM O’CONNELL, a native of Zwingle, is pictured here at the Jackson County Pro Rodeo, where he got his start in rodeo.

TIM O’CONNELL, a native of Zwingle, is pictured here at the Jackson County Pro Rodeo, where he got his start in rodeo.

He spent the first five-and-a-half months of 2019 recovering from a major injury. Over the final three months and 10 days of the season, he dominated. O’Connell finished the regular season with $113,168 and sixth in the world standings.

It was a miraculous run for a man who already owns the last three world championships, but it also was a different year that featured a complex surgery, five months of rehabilitation, two months of living away from home, and more time with his family than he’s ever experienced in his professional career.

“From June 20 to the end of the season, I won more money this year than I did last year,” said O’Connell, 28, of Zwingle, now living in Marshall, Missouri, with his wife, Sami, and their 1-year-old son, Hazen. “I thought that was pretty cool based on how I competed. I rodeoed a lot differently than I did in years past.

“This year, I entered two or three rodeos a day and gave myself the best option possible based on where I drew the best horses. I think that really made a difference.”

It did, but it was a long road to get there. The road began at the 2018 National Finals Rodeo, and it will culminate in this year’s championship, set for Dec. 5-14 at the Thomas & Mack Center in Las Vegas. The story winds around the final night of last year’s campaign, the 10th round of the NFR.

His shoulder was damaged severely. If he were a ragdoll, O’Connell’s left shoulder would have been held together by just a few stitches. So, on Jan. 16, well-known rodeo surgeon Dr. Tandy Freeman performed the procedure to repair the extensive damage to the cowboy’s shoulder.

“Six out of the eight tendons in my shoulder were torn,” said O’Connell, who credits much of his success to his sponsors, 12 Gauge Ranch, Polaris, Panhandle and Rock and Roll Clothing, Justin Boots, Veach’s Custom Leather, Ortho Equine, Capri Campers, Twin Cities Featherlite, American Hat Co. and Super Duty Fans. “My shoulder was hanging on by a thread.

“They fixed the tendons and a capsule, and I started rehab 48 hours after surgery,” O’Connell recalled.

The rehabilitation included some intense workouts. With the cowboy intent to beat the initial deadline of return to action in six months, he put in six days a week, but that backfired a bit. When he saw Freeman again in April, he and his family opted to move to Texas for a few weeks to complete therapy. That’s when he was introduced to sports massage therapist Benny Vaughn.

“Tandy called him his 911,” O’Connell said. “I worked out at Fit N Wise in Decatur (Texas) and saw Tandy every other week for checkups. I finished down there until a week before I started rodeoing in June.

“I was down there two months, and I wouldn’t have been able to do it without Cody Lambert,” he said of the former NFR qualifier who still is heavily involved in the PBR. “The Lambert family actually put us up. They were such a blessing. We stayed in his bunkhouse, which is nicer than 90 percent of America’s homes. He’s a good man, and I wasn’t the only one he put up while I was there. He takes care of rodeo cowboys.”

O’Connell’s extensive time away from the rodeo arena meant more time with his wife and son, and that was very important to the three-time champ. The rodeo schedule — especially from the end of June to the final day of the regular season on Sept. 30 — often means he’s away from them for extended periods of time.

By missing out on rodeos in Denver, San Antonio, Houston and Arlington, Texas, he was able to share more experiences while watching Hazen grow first-hand instead of increments at a time.

“I got to be home, be a dad, be a husband, and experience real life,” he said. “I was getting a little sour of rodeo at the end of last year. I think God finally said, ‘If you don’t want to take a break, then I’m going to make you take a break.’

“I see it more as a blessing than as a curse. I got to be with my son at his first birthday party instead of being at The American, and I got to take care of a lot of things.”

Those little things can be missed, so he cherished every episode. He also gained a hunger for competition that might have been missing.

“It lit a fire in me,” said O’Connell, whose father, Ray, was a pickup man, and whose brother, Will, is considered one of the best pickup men in the Professional Rodeo Cowboys Association. “I had good days, and I had bad days. I’m a competitor, and I don’t like sitting on the sidelines and watching. But my wife kept me grounded and kept me humble, and that kept my spirits up.

“Sitting out relit a passion for rodeo in me.”

It showed, and he actually scored big even through the final 30 days of the campaign. That included victories in Elk City, Oklahoma; Ellensburg, Washington; and Fort Madison, Iowa … all took place in the same week, totaling $21,000.

“I didn’t go to any rodeo that didn’t count for the world standings,” he said, pointing out that he missed financially rewarding opportunities at the Calgary (Alberta) Stampede and event that were part of the World Champions Rodeo Alliance. “It worked out better than I thought. I hoped by early September that I’d have the No. 15 guy caught. By mid-August, I had him caught and was moving up the ladder even faster.

“I figured if I got to the eighth spot, that would give me a fighting chance to compete for the world title. Once September hit, I got on a heater, and it didn’t quit.”

Even when he was in the heat of his heater, O’Connell found time to be with Sami and Hazen. He doesn’t like missing opportunities to see his family.

“I was gone this year more than usual, but there was only one week where I had to stay out on the road,” O’Connell said. “If I can get 36 hours at the house, I’ll take it. I don’t like hanging out on the road. I want to get home, see my wife, see my son. That’s what energizes me. You spend a whole lot more money doing it, but it’s worth it to me.”

“This is the best I’ve ever felt and the most confident I’ve ever been going into the finals,” O’Connell said. “Everything happens for a reason. It’s been a different feeling getting ready this year. I think it’s been for the better. We just adapted to what we had.

“I’ve been the guy with the target on his back the last three years. Now, I’m the hunter, not the hunted.”

71°
Showers in the Vicinity